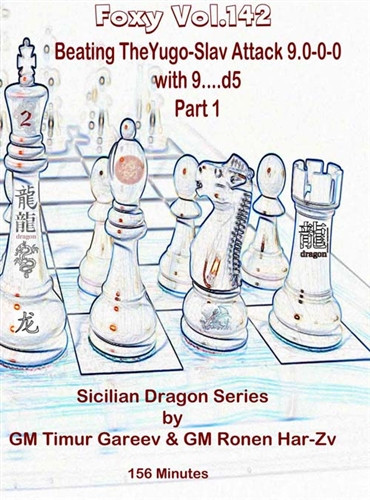 Presented by GM Timur Gareev and GM Ronen Har-Zv, the two Grandmasters turn to White's aggressive plan called the Yugoslav Attack, concentrating on 9.0-0-0. This move, leaving the Bishop on f1, is a serious alternative in the Yugoslav attack - instead of 9.Bc4 White goes for the immediately Kingside attack.

On this chess opening DVD, GM Gareev and Har-Zv recommend 9...d5 in answer for Black (avoiding long forced tactical moves), a move more strategic and positional in approach with new ideas for Black. The results in practical play have been a lot of wins at the highest level.

This set of 3 Sicilian Defense DVDs covers lines for both White and Black, while serving to introduce the player to the thematic ideas and motives in Dragon variation. GM Timur discusses the key ideas and tactical routes for Black to gain the counter-attacking edge.