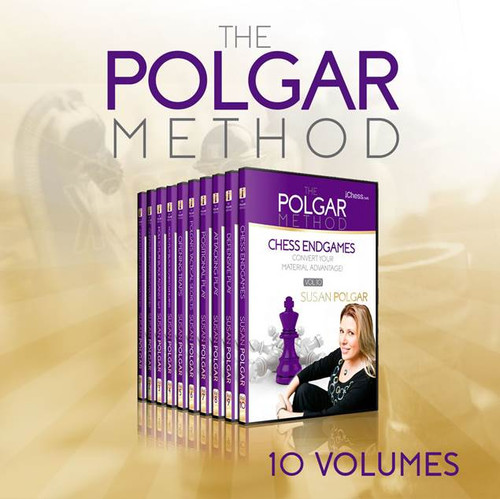 Most players are let down by their weaknesses. The Polgar Method fixes that with a specific course on each aspect of chess.

First up is the opening. While this is probably the least important phase of the game until you’re over 2100 ELO, you still need to get to the middlegame with a decent position. That’s why Susan gives you her recommended repertoire for anything you might face. A versatile opening with a ton of attacking potential as White; a counter-attacking response to 1.e4 and an aggressive line against 1.d4/c4/Nf3.

In line with Susan’s chess philosophy, each opening is broken down into strategic idea and typical themes. No need to remember endless variations, just understand what you’re trying to achieve. The most common opening traps are also covered. Not the basic ones everyone knows but the more subtle tricks that can appear early on. Even GMs have fallen for these so being familiar with them will save you some embarrassing losses and you help you catch a few people out.

Then we look at tactics. Again, the course assumes you know the basic motifs such as forks and pins. What Susan does is expand on these to show how they combine in real situations. You’ll also learn sneaky ways to push your opponent into your tactical trap.

Next, Susan reveals how we can improve our chess by learning from the masters of positional chess. Why having a Queenside pawn majority was enough for Capablanca to win games. How Karpov dominated the key lines and squeezed Kasparov off the board. These positional methods will serve you well throughout your chess career.

Then you learn the secrets of attacking the King, perhaps the most fun pursuit in chess. Susan breaks down the different plans of attack based on where the enemy King is: in the center; on the same side of the board as your King or on the opposite side. Each King position requires a specific approach. What to attack with; how quickly; how much you should sacrifice and why. Susan reveals all with instructive examples taken from GM games.

Most club players never learn how to defend – part of the reason they don’t make great progress. Susan reveals how champions like Botvinnik and Magnus Carlsen combine defense with counterplay, staying safe without handing their opponent the initiative.

Finally, Susan makes sure you always get rewarded for your hard work by converting the endgame into a win. Endgame Play will teach you how to hold a Rook endgame a pawn down; why not all opposite-color Bishop endings are drawn and how to use the bridge-building technique to escape perpetual check and win the Lucena position.

GM Susan Polgar has decades of experience of coaching at the highest level. A former prodigy, she knows what works and what is most useful at the board. The Polgar Method is loaded with lessons and practical advice to increase your  chess understanding and help you find the strongest move at the board.

If you want a training program you can follow from start to finish and emerge a much better player at the end of it, presented by perhaps the most respected coach in the world, check out The Polgar Method.

After Studying the Course You Will:

* Have a watertight opening repertoire based on understanding themes so that, no matter what your opponent plays, you are able to find the right idea quickly and confidently. Susan gives you her recommended repertoire for facing both 1.e4 and 1.d4, plus a universal set-up as White. Each opening has its emphasis on playing for the win.

* Be able to win games by snowballing small positional advantages – such as a Queenside pawn majority – until the opponent is pushed off the board. Susan teaches you Capablanca’s method in volume 7, Positional Play.

* Know how to make your attacks hit hard by using Susan’s specific strategies depending on where the enemy King is in relation to yours.

* Be able to resist attacks by combining defensive moves with counterplay. Defensive play, along with the endgame, is an untapped source of rating points. Too many club players crumble when faced with threats but this will change after seeing Botvinnik’s mastery in volume 9.

* Have all the essential endgame knowledge required to convert the advantage you’ve painstakingly built over 40+ moves. Endgame theory never changes, making this the best one-time investment in your chess available.

Queen Pawn Opening Mastery (vs. ...e6 set-ups)
In this first volume, GM Susan Polgar teaches the London System, a versatile opening which can be played against almost any response from Black. We look at how to play when Black doesn’t fianchetto the dark-squared Bishop with …g6.

How to Play Black Against 1.e4
In this volume, GM Susan Polgar demonstrates how to play the French Defense against all of the main variations available to White. The French Defense is one of Susan’s favorite openings as it is based on a few strategic ideas and allows Black to dictate the direction of the game (after 1.e4 e6, White has to play against the French. After 1.e4 e5 White has many options).

How to Play Black Against 1.d4 & c4/Nf3
Watching the model games will let you see the ideas in action and make them stick in your memory. By the end of this course, you’ll be able to play the King’s Indian Defense with confidence and will have a reliable response to 1.d4 (and 1.c4/Nf3) for life.

Opening Traps – Avoiding the Most Common Chess Traps
Susan has selected traps based on the 3 types of opening: semi-open games (1.e4 c5, 1.e4 d5); open games (1.e4 e5) and closed (1.d4). By grouping them in this way, you get to see which combinations tend to appear in different positions.

Polgar’s Tactical Secrets – Learn GM Susan Polgar’s Best Tactics
Polgar’s Tactical Secrets makes things easier by looking at the different types of tactical motifs and seeing how they can appear in games. Even at the Super GM level, we see pins, forks and surprising intermediate moves winning games. Often the final moves comes at the end of a 2 or 3 move sequence so spotting the potential for the tactic is crucial.

GM Damian Lemos had this in mind when he decided to record a DVD on “Mastering the Classics.”

Positional Play – The Polgar Method for Positional Play
This course will help you with often overlooked decisions like which pieces to recapture with and when to maintain the tension. At the end of this course, you will see the less obvious factors in the position and know how to make best use of them.

Attacking Play – Attacking Secrets from a World Renowned Chess Coach
GM Susan Polgar analyzes model games for each type of position, highlighting typical sacrifices and ways to make things difficult for the opponent. This will help develop your attacking intuition, knowing when sacrifices will pay dividends and when we should proceed more slowly.

Chess Endgames – Convert your Material Advantage
In Chess Endgames, GM Susan Polgar reveals the tried and tested techniques to win the most common types of endings. Knowledge of these will serve you for a lifetime – they never change. You’ll learn how to save Rook endgames a pawn down; how to win despite having opposite-colored Bishops and whether you can win with a Queen against a pawn on the 7th rank.