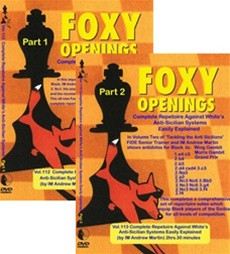 In this important two-part series on the anti-Sicilian for Black, IM Andrew Martin surveys Black responses (after 1.e4 c5) to all "non-standard" White second moves. Part 1 looks at 2.c3 and 2.Nc3 in detail, while Part 2 examines everything from 2.b4, the Wing Gambit, to the respectable 2.f4 Grand Prix attack. His analysis and ideas show that Black is in good shape and that the recommended systems are well suited for players of all levels. This all-new Foxy openings DVD equips the Black player with a complete repertoire against all of White's anti-Sicilian tries.
Getanswers to: the Alapin system, the Wing Gambit, the Smith-Morra Gambit, the Grand Prix attack - and after 1.e4 c5 Martin covers 2.b4, 2.b3, 2.Na3, 2.a3, etc. Finally, if 2.Nc3 Nc6 Martin shows you 3.Bb5, 3.g4!? and 3.f4 lines.
This completes a comprehensive set of repertoire notes which equip Black players of the Sicilian for all levels of competition.
Video Runtime, both DVDs: 5 hours
The Foxy Chess Openings Series is a timeless collection of Grandmaster openings explained simply enough to comprehend at any level. These DVDs will improve your rating and give you a greater understanding of the openings discussed, regardless of your present playing level.