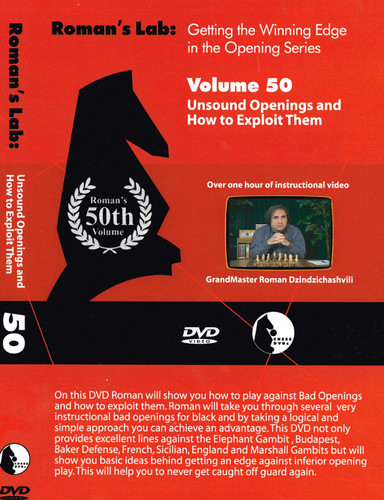 Getting the Winning Edge in the Chess Openings Series

On this DVD Roman guarantees you a very playable position and some advantages for White against the Sicilian Defense. Roman will demonstrate to you easy to learn universal plans and ideas in the opening and middle game.

On this DVD Roman will explain move by move highly instructional and amazing Kings Indian games played by some of the world's greatest players. The games range from 1950 to the present and includes gems from Fischer and Kasparov.

Unsound Chess Openings and How to Exploit Them

On this DVD Roman will show you how to play against Bad Openings and how to exploit them. Roman will take you through several very instructional bad openings for black and by taking a logical and simple approach you can achieve an advantage. This DVD not only provides excellent lines against the Elephant Gambit, Budapest, Baker Defense, French, Sicilian, Englund and Marshall Gambits but will show you basic ideas behind getting an edge against inferior opening play this will help you to never get caught off guard again.