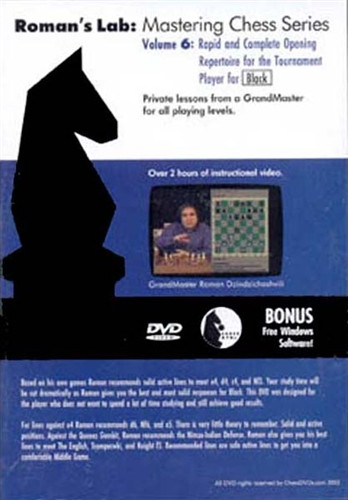 Over 2 Hours of Chess Instruction on Video

With over 2 hours of instructional video, Roman's Lab Volume 6 is an invaluable guide to players that do not want to spend a lot of time studying and but still want good results. It is hosted by Grandmaster Roman Dzindzichashvili, former US and Russian Champion and Coach of World Champion Garry Kasparov.

Based on his own games Roman recommends solid active lines to meet 1.e4, 1.d4, 1.c4, and 1.Nf3. Your study time will be cut dramatically as Roman gives you the best and most solid responses for Black. This video was designed for the player who does not want to spend a lot of time studying and still achieve good results.

For lines against 1.e4 Roman recommends ...d6, ...Nf6, and ...e5. There is very little theory to remember, but you get solid and active positions. Against the Queen's Gambit, Roman recommends the Nimzo-Indian Defense. Roman also gives you his best lines to meet The English, Tromposwki, and 1.Nf3. Recommended lines are safe active lines to get you into a comfortable middlegame.