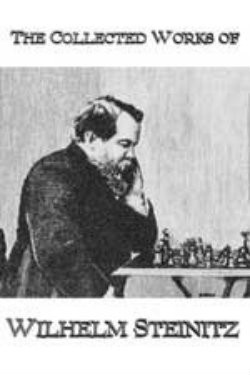 * The Games of Wilhelm Steinitz
* The Modern Chess Instructor
* The Sixth American Chess Congress
* The Steinitz Gambit
* Magazine Articles Collection
* Crosstables and Research folders
* ChessBase Reader included
"The Collected Works of Wilhelm Steinitz, a wonderful compendium of the craftsmanship of the great thinker who was called the "Michelangelo of chess."  -The Washington Post


"His teachings became a turning point in chess history: it was from Steinitz that the era of modern chess began."  -Garry Kasparov (from My Great Predecessors)

Here is your chance to discover the first World Chess Champion in his own words! This breakthrough project showcases only writings by Steinitz himself, literally thousands of pages by the most successful match player in history. Now you can meet the "Great Theorist" in a way never possible before!

Chess players of every level would benefit from a familiarity with the games of Steinitz, and The Collected Works of Wilhelm Steinitz is the perfect tool for doing so. More importantly, however, this collection contains a lifetime of chess enjoyment, provided by the greatest figure in the history of the game. The result is an opportunity for the reader to experience the whole career of Steinitz, guided by the first World Champion's own comments, an opportunity that offers to increase our chess understanding. For it is in his games and notes that Steinitz fully reveals his approach to chess and methods of thought, and in these digital pages it is possible to peek into the mind of the player who brought science to modern chess.

It should be stressed that only writings by Steinitz are found here. No doubt many of his games have been annotated by famous masters, but the central idea of this project is to let Steinitz speak in his own words. For the first time anywhere all of Steinitz's surviving games have been gathered into one place, along with his two books and a selection of his writing as a chess journalist, all readable and interactive by chess software. The annotations have been assembled and translated into English algebraic notation, both games and articles. In all, about 900 games annotated by Steinitz are included, plus a lot of supplementary text.

The Collected Works of Wilhelm Steinitz includes all of the following:

The Games of Wilhelm Steinitz - This main biographical collection has 1,072 games played by Steinitz, and includes 22 text documents, with 288 games annotated by Steinitz. These are given in full text, woven into the game notation. Steinitz's own account of 4 World Championships, the London-Vienna match, the cable match with Tschigorin and much more, all bound together with Keys, hyperlinks and photos.

The Modern Chess Instructor eBook - Steinitz's masterpiece in 20 text documents, which include 7 chapters of Steinitz teaching chess - from the moves and rules onward. Then Steinitz discusses the openings in chess, examining 8 major openings with 167 Surveys and 79 Illustrative Games. Also included is the Steinitz-Tschigorin match of 1889, for the World Championship. A complete course in chess!

The 6th American Chess Congress eBook - Tschigorin and Weiss tie for 1st & 2nd place. 5 text documents, including the Committee Report and tournament crosstable. Then all 430 games are given, each annotated by Steinitz. An important part of American chess history, and one of the best tournament books of all time.

The "Magazines" Collection - which has large excerpts from the Field, and the International Chess Magazine. About 85 games here, plus 13 text documents - including the Wisker-MacDonnell match (1874), the Zukertort-Rosenthal match (1880), the Lipschuetz-Delmar match (1888) and many additional games. Also found are the "analysis" lines from the Steinitz-Tschigorin cable match and the famous article "Morphy and the Play of His Time."

Complete Crosstables - A .pdf file of all Steinitz match and tournament crosstables, many never published before now.

In addition to these features, The Collected Works of Wilhelm Steinitz has continued to expand after its 2003 publication. The newly added "Research" folder contains recently discovered Steinitz games (now 35 in number!), additional games annotated by Steinitz, and articles written by Steinitz.

In total nearly 900 games annotated by Steinitz, plus his two books, extended excerpts from his writings, and many great photos - a lifetime of chess enjoyment, an opportunity not to be missed! Everyone has heard about Wilhelm Steinitz, but very few have seen his amazing literary output. Discover for yourself what he said, how he said it - and what makes him the greatest player who ever lived!