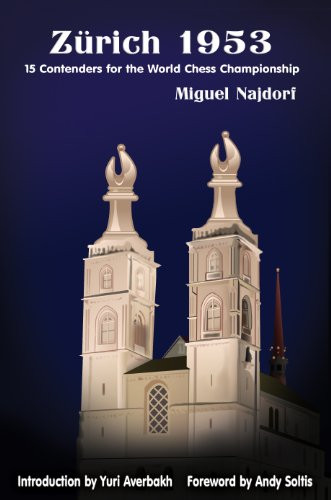 Zurich 1953: 15 Contenders for the World Chess Championship E-book for Download

The Stuff of Legend A great tournament deserves a great book. That’s what grandmaster Miguel Najdorf produced in his account of one of the greatest and most important chess events of all time, the 1953 ZÃ¼rich Candidates Tournament, in which 15 of the world’s top players battled for the right to challenge the world champion, Mikhail Botvinnik. After two months and 210 games, many of which rank among the best ever played, Russian grandmaster Vassily Smyslov finally came out at the head of a star-studded field that included Sam Reshevsky, Paul Keres, David Bronstein, Tigran Petrosian, Efim Geller, Alexander Kotov, Mark Taimanov, Yuri Averbakh, Isaac Boleslavsky, Laszla Szaba, Svetozar Gligoric, Max Euwe, Gideon Stahlberg, and Najdorf himself.

This is the first English edition of this classic work, until now available only in its original Spanish. It includes all 210 games with Najdorf’s full and extensive notes, plus all the original introductory material, biographical sketches of the players, round-by-round accounts of the action, closing summary, and a survey of the tournament’s impact on opening theory. Additionally this edition has many more diagrams and photos, an introduction by Yuri Averbakh (one of the last surviving participants) and a foreword by Andy Soltis.

Great news - With this e-book you will receive 3 files: Adobe .pdf, ePub, and PRC ina self-extracting zip. so now you can read your chess books on almost any device! Whether it is an iPad, iPhone, Kindle, or Android, your new ebook will be ready wherever and whenever you want.