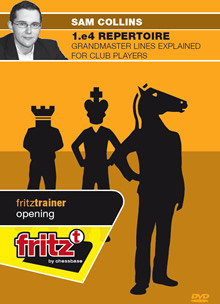 Constructing an opening repertoire is one of the chess player's most difficult and time-consuming tasks. Turned off by masses of theory, many players shy away from critical lines and concentrate on trappy lines, "universal" systems, or variations which concede the advantage of the first move in order to get a playable position.

In this Video Download, Sam Collins offers another way. Discussing sound, aggressive lines, all with regular top-level support from GMs Tiviakov, Howell, Pavasovic and others, Collins breaks down each position into its key components and explains the core plans and ideas, together with enough theory to avoid any accidents and catch your opponents by surprise. With over 8 levels of top-class instruction, he helps lay the foundation for a repertoire to last for your whole chess career.

Sam Collins is an International Master from Ireland who made a GM norm in 2008. He has represented his country at five Olympiads, winning a gold medal at Bled in 2002. He is the author of several bestselling opening books and is a regular columnist in chess periodicals. As a coach, he has lectured national junior squads and taught the master class at the renowned Berkeley Chess School. He is a former Irish champion and the reigning champion of Japan.