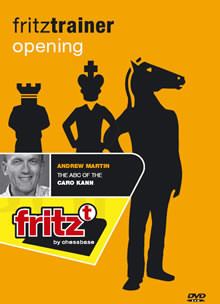 Andrew Martin is 49 years old and lives in Sandhurst, England. He is an International Master who has authored several best-selling Video Downloads for ChessBase. He is the current World Simultaneous Display record holder as cataloged in the 2006 edition of the Guinness Book of Records. The ABC of the Caro Kann describes a repertoire for Black which will stand the test of time and the main ideas and themes of the opening are explained in Andrew Martin's usual friendly, accessible style. The Caro-Kann is a permanent defense to 1.e4!