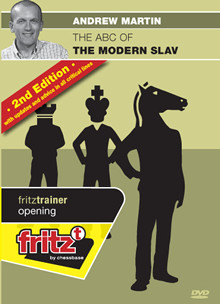 After 1.d4 d5 2.c4 c6 we have the Slav Defense to the Queen's Gambit. This chess opening has always had a solid reputation - dating right back to the days of Lasker, Alekhine and Capablanca - but it's only in the last 15 years that the popularity of the opening has really taken off at all levels. Naturally, Slav set-ups and ideas can also be used again the other Flank Openings (1.Nf3, 1.c4, 1.b3 etc.) and so by learning the Slav, in a way you are learning a universal approach. Coming to this Video Download, we will find ideas for Black which can be used by amateur and professional alike, predominantly featuring the trendy new approach to Black's armory involving a very early ...a7-a6.
The ...a6 Slav offers Black solidity, dynamism and variety couched in an easy-to-understand setting. Perhaps this is why Grandmasters of the caliber of Kasparov, Shirov, Morozevich, Bologan and Dreev, among many, have all used the opening with success and continue to do so! The Slav with an early ...a6 remains as solid and as flexible in 2010 as it ever was. If anything, the reputation of this line has been enhanced since the original Video Download was produced. In this modern update Andrew Martin considers nine new, interesting and important games, most involving strong Grandmasters, which demonstrate that this is one of Black's best defenses to 1.d4.
Video running time: 5 hours

This is a sample of the Fritztrainer DVD "The ABC of the Modern Slav - 2nd edition" by Andrew Martin. More Info: http://chessbase-shop.com/en/products/5838 More Videos: http://www.youtube.com/user/ChessBaseGmbH