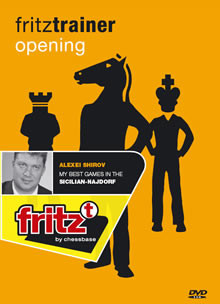 Alexei Shirov: My Best Games in the Najdorf Sicilian (Download)

Now the genius from Riga presents and explains his best games in a series of training Video Downloads in the Chess Media System. Shirov's uncompromising style of play is also reflected in his manner of commenting his own games. He is perfectly objective, and in fact sometimes ruthlessly critical of himself. Even when he is dealing with highly acclaimed games, his judgment is unbiased - no glossing over critical positions where he did not find the optimal continuation. Chess fans are treated not just to a portrait of this extraordinary player, but they can also learn a lot about the development of particular opening lines at top level in the course of time. On this Video Download by Shirov, you will find his most brilliant games in the Sicilian Najdorf. Shirov's duel with van Wely in the Najdorf Keres Attack is certainly one of the highlights on this Video Download, just as the presentation of one of his best games against Kasparov. More than 3 hours entertainment and enlightenment, all packed onto one Video Download.