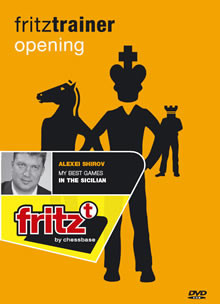 Alexei Shirov: My Best Games in the Sicilian Defense (Download)

Since 1992, Alexei Shirov has belonged to the best players in the world. Within a very short period he established himself as one of the absolute top guns, reaching #4 in the world on the FIDE rating list and a rating of 2751 Elo. Many of his brilliant games are characterized by his famous uncompromising attacking play, often leading to a finish that comes as a surprise ?? not only to the opponent, but also the spectators.

Now the genius from Riga presents and explains his best games in a series of training Video Downloads in the Chess Media System. On this Video Download, Shirov focuses on his most outstanding achievements in the Sicilian (except the Najdorf which is dealt with on a separate Video Download), a personal selection combining the highest chess quality with aesthetic pleasure. His lectures are designed to not only explain the different opening lines, but also to present interesting and sometimes perplexing ideas and sacrifices in the middlegame. On this brilliant training Video Download, with a total playing time of nearly 4 hours, you will find Shirov play Anand, Kramnik, Leko and other top players.