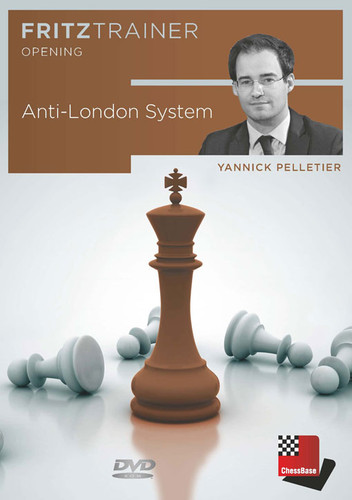 The London System, which for a long time had been the reputation of a rather harmless sideline, has developed into a very popular opening, and World Champion Magnus Carlsen is only one of many top players who plays it regularly. The London System indeed suits the modern approach to openings very well: White does not necessarily strive for an opening advantage but is content to develop his pieces and hopes to outplay his opponent in the middlegame.

However, the London System is more dangerous than it seems and if Black is not careful he can easily wind up in a bad position. Theory develops fast today, even in less concrete systems. On this DVD GM Yannick Pelletier offers Black a repertoire against the London System that you can employ no matter which opening you usually play against 1.d4 followed by 2.c4, whether systems with ...d5, systems with ...g6, the Queen’s Indian, Queen’s Gambit, Benoni, Benko, or Dutch. Thematic games explain and illustrate the theory and ideas of the repertoire Pelletier proposes. At the end of the Trainer you are invited to test your knowledge. The author pauses at key moments and asks you to find and to play the best move, after which he gives feedback. A database with carefully selected and annotated games helps you to understand and play the opening better and to counter the London System with success.