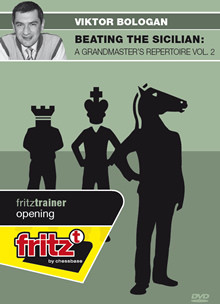 Beating the Sicilian - A Grandmaster's Repertoire, Vol. 2
For Download

The second volume of the Open Sicilian is dedicated to two very important areas. First the Najdorf Variation, maybe the most interesting chess opening of all time; secondly, the most romantic line in the Sicilian - the Dragon Variation. It's actually enough to point out that both openings were played successfully by Garry Kasparov with Black.

The author's task was to give White some clear lines which will survive all kind of possible improvements from the Black side and still be able to give White hope for an advantage. In both cases Bologan recommends a setup with pawn f2-f3, then Be3 and Qd2, which is the so-called English Attack. The similarity of ideas makes the job of memorizing lines somewhat easier, and at the same time the traditional line by line approach allows the avoidance of any unpleasant surprises. Many mysteries under the surface of the Sicilian can be found by hard work and experience and the author really hopes that this Video Download will help you accomplish.


Viktor Bologan is a pupil of the top Moldavan trainer Vecheslav Chebanenko. For many years Bologan has been the number 1 in Moldava and has represented his country in eight chess Olympiads. His greatest successes were in 2003, when he first of all won the Aeroflot Open and then the famous Dortmund Tournament, ahead of Kramnik and Anand. The Moldovan has extensive experience as a trainer and has also published his first books.