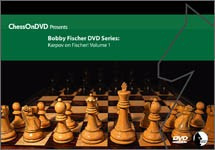 The Bobby Fischer DVD Collection, withKarpov, Polgar and Benko. These GMs have personally selected their own favorite Fischer games, played during the American's "Quest for the Crown" and prior to the ultimate showdown with Boris Spassky in 1972. Susan Polgar willcomment whileshowing you Fischer's most brilliant games and combinations. Pal Benko covers his battles with Fischer, andvol. 5 covers the Fischer-Spassky 1992 Rematch.

Bobby Fischer DVD Collection: Karpov on Fischer, Vol. 173 minutes
In a remarkable and unprecedented video-publishing endeavor, the 12th World Champion Anatoly Karpov has created a series of chess dvsabout the games of the American World Champion - Robert J. Fischer. Karpov has personally selected his own favorite Fischer games, played during the American's "Quest for the Crown" and prior to the ultimate showdown with Boris Spassky in 1972. Join Fischer's successor as he analyzes some of the classic Fischer brilliancies that shaped a legend in American chess - in the first of Karpov's three special DVD volumes about Fischer.

Bobby Fischer DVD Collection: Karpov on Fischer, Vol. 274 minutes
Continue withAnatoly Karpov in his speciallycreatedseries of chess DVDsabout the games of the American World Champion - Robert J. Fischer. Karpov has personally selected his own favorite Fischer victories, played during the American's historic World Championship Match with Boris Spassky in 1972. Join Fischer's successor as he analyzes some of the decisive Fischer battles that allowed the American chess legend to "Claim the Crown"in this second of Karpov's threeDVD volumes about Fischer

Bobby Fischer DVD Collection: Karpov on Fischer, Vol. 374 minutes
The 12th World Champion, Anatoly Karpov, has again selected his favorite gamesof the American World Champion - Robert J. Fischer. Here Karpov discusses some of the gamesplayed during the rematch between Robert Fischer and Boris Spassky in 1992. Join Fischer's successor as he analyzesthe decisive battles that opened a new chapter for an American chess legend in his "Historic Return"in the third of Karpov's three special video volumes about Fischer.

Bobby Fischer DVD Collection: Fischer-Spassky 1992 Rematch, Vol. 5135 minutes
Bobby Fischer and the Holy Grail. The story of Bobby Fischer's sensational comeback and an independent look behind the scenes in his self-styled World Championship rematch with Boris Spassky in Sveti Stefan and Belgrade 1992. Plus get Nigel Short's historic match victory over Jan Timman in El Escorial (Short v. Timman Candidates match) - the best of the action, expert analysis and the players' views.

Bobby Fischer DVD Collection: Bobby Fischer's Most Brilliant Instructional Games & Combinations by Susan Polgar, Vol. 6110 minutes
Susan Polgar will share with youthe experiences she had with Bobby Fischer early in her chess career. Susan answers some of the questions everyone wants to know; like who would of won a Fischer-Karpov match in 1975, the impact Fischer had on chess, what she learned from Bobby and how he compares with today's best. Susan will also take you through 5 highly instructive chess games and combinations. So let one World Champion take you through another World Champion timeless masterpieces, which will certainly enhance your chess Knowledge and ability.

Donald Bryne - Fischer 1956
One of Bobby's most famous games ever
Fischer - Robatsch 1962
Attack with opposite side castle
Robert Byrne - Fischer 1963
How to develop and then open the position, and use the inaccuracies of your opponent
Fischer - U. Geller 1968
King's Indian Attack, making a plan, open files
Fischer - Tigran Petrosian 1971
Isolated pawn - In this game Bobby Fischer showed his versatility by playing a superb positional game. He exploited blacks weaken isolate d pawn; open files penetrated to the 7th rank and activated his King. This game further demonstrated that Bobby was not only a great tactical player but a great positional one also.
Bobby Fischer's Greatest Combination
1. Letelier-Fischer 1960 2. Fischer-Benko 1963 3. Fischer-Myagmasuren 1967 4. Fischer-Shocron 1959 5. Spassky-Fischer 1972


Roman's Lab: Volume 55 - A Tribute to Bobby Fischer180 minutes
On this DVD Roman pays tribute to the greatest pure chess genius of all time, Bobby Fischer.Included on this DVD:Never published and never revealed commentary and facts about Fischer's life