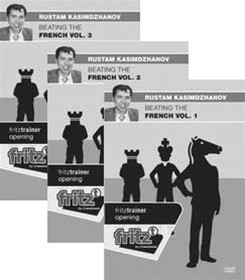 In his DVD series on the French Defense, Rustam Kasimdzhanov presents a promising White repertoire based upon 3.Nc3. In this first Beating the French DVD, GM Kasimdzhanov examines positions following 1.e4 e6 2.d4 d5 3.Nc3 Bb4 4.e5. Then the second DVD continues with the Classical, or Steinitz, lines of the French. Finally, the third DVD examines the Burn, or Rubinstein Variation, with a Black exchange in the center.

In 13 video lessons the author shows how White can use the space advantage given by the pawn on e5 to get an attack on the Black King or a better endgame. Kasimdzhanov packs this 3.5 hour DVD with valuable information concerning the important attacking ideas, maneuvers, and plans seen in this variation.

Check Out this Example Video of Beating the French

Rustam Kasimdzhanov. Born in 1979, the Grandmaster from Uzbekistan has for many years been known as a very strong and imaginative player. However, in 2004 Rustam Kasimdzhanov shocked the chess world by winning the FIDE world chess championship title, beating a string of world-class players like Ivanchuk, Grischuk, Topalov and Adams in the process. Kasimdzhanov is a very deep player, who is able to explain chess ideas in an eloquent, lucid style, with a fine touch of humor. His lessons are both entertaining and instructive - perfect for students who seek to avoid dry theory.

No other software required.