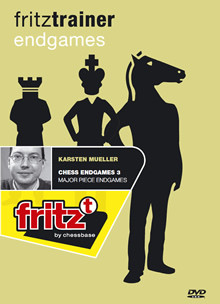 The third part of the endgame series tackles queen endings, rook against minor pieces, queen against rook and queen against two rooks. Queen endings are not nearly as mysterious as they appear at first sight. Knowing a few rules of thumb and principles will make things a lot easier for you. In the case of rook versus knight or bishop, you should not only know how to draw a pawnless endgame, but also when a fortress can be set up and when not. Something similar is the case for queen against rook, except of course that when there are no pawns the queen wins against the rook. In the duel against two rooks, further aspects come into play such as the coordination of the rooks. Those who have always found studying endgames with chess textbooks too dry and tedious will enjoy this Video Download with its comfortable training system and benefit enormously ?? in brilliant endgames at the actual board. Complete video running time: 7 hours.

Since 1988 grandmaster Dr. Karsten Mueller from Hamburg plays for the Hamburger Schachklub in the Bundesliga and in 1996 and 1997 he finished third in the German Championship. As an internationally renowned endgame expert he is the author of the endgame column in the ChessBase magazine and the author of the Endgame Corner column on ChessCafe.com. His book ??Fundamental Chess Endings", which he co-authored with Frank Lamprecht and which was published in 2001 by Gambit is already considered to be a modern classic.