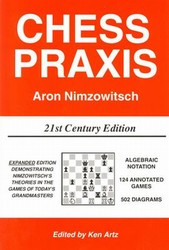 In the early part of the twentieth century the most controversial topics in chess were the novel theories of Aron Nimzowitsch, the "stormy petrel" of the chess world. It seemed to many that Nimzowitsch was trying to demolish the classical Steinitz /Tarrasch chess system on purely irrational grounds, for many of his moves seemed arbitrary and even ridiculous. Yet, using his system, Nimzowitsch won game after game, and when he became rated among the top three or four players in the world, the ridicule that had greeted his system changed to serious question. It is now recognized that hypermodern chess (as Nimzowitsch's ideas came to be called), is an integral part of the chess configuration, broadening and deepening chess enormously.

Chess Praxis is the fullest exposition of Nimzowitsch's new analysis and theories, and it is beyond question one of the dozen most important books ever written on chess. The history of the theory of chess has long been an attempt to derive principles and structures, beyond simply lists of moves, and Nimzowitsch has provided a new analysis of chess that has proved to be remarkably profound and useful. Abandoning momentarily the classical chronological division of the game into periods, he breaks chess into important positional situations: restriction and blockade; centralization; overprotection; the isolated d-pawn; hanging pawns; the Bishop pair; alternating maneuvers against enemy weaknesses when one possesses a space advantage; plus many strategies of hypermodern chess. Under these headings Nimzowitsch reveals numerous striking and imaginative tactics under a wide variety of positional conditions.

The development of the author's ideas is both rich and extremely clear. Each possible maneuver is illustrated by at least two games, demonstrating Nimzowitsch's surprising resources against some of the world's strongest players. All games are closely analyzed. Fifteen games from modern times have been added to the original 109 games annotated by Nimzowitsch.

This is a book which every serious chess player must own. It is the monument of a great transition period in chess, and is packed with numerous valuable hints, suggestions for improving one's game, and general understanding which will benefit virtually any player wishing to improve his game.