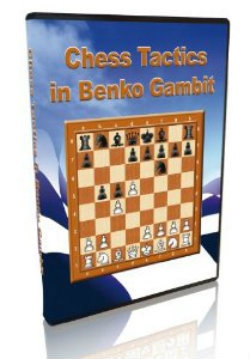 Please Note: Download keys must be manually made. You will receive your download link and key within 24 hours of purchase (usually much sooner). Please watch for your email. If you do not receive the link and key after 24 hours please contact: email@ChessCentral.com for help

This course is aimed at club and intermediate players and presents the theory and playing strategy in the most sharp and deciding variations of the Benko (Volga) gambit.

The course presents a deep theoretical and practical overview of the actual variations. Many more new exercises provide a great opportunity to reinforce your knowledge.

The original name of the opening was the Volga Gambit, named after the Volga River because of an article about 3...b5!? by B. Argunow written in Kuibyshev (Samara since 1991), Russia, that was published in the second 1946 issue of the magazine Schachmaty in USSR. The term is still widely used in Russian literature. Beginning in the late 1960s, this opening idea was also promoted by Pal Benko, a Hungarian-American Grandmaster, who provided many new suggestions and published his book The Benko Gambit in 1974. The name Benko Gambit stuck and is particularly used in English-speaking countries.