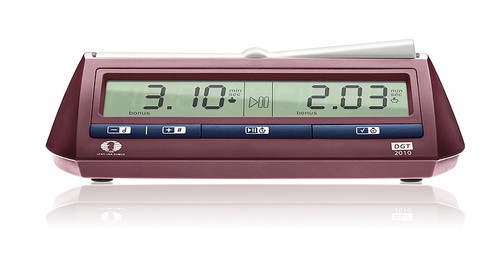 This DGT 2010 Digital Game Timer has been designed to be used as a game clock for various two-person board games, especially Chess, Go and Draughts. The new DGT 2010 features the following types of time controls:

See the full descriptions below of each mode.

Differences of the new model DGT 2010 with respect to the previous version are:

Time forms a part of every sport, especially sports such as chess, go, draughts, shogi and Scrabble. The difference between the players is determined not only by the potential performance level of the individual player but also by the time the player needs in order to reach this level. The more a sport is seen as a measure of performance the more important it is to limit the time a player needs to make a move. This must be done in a way which is most appropriate for the game and the sport concerned. The DGT 2010 offers 13 different methods for registering the timing of a game between two players.

While several methods are well known, others may be less familiar. Several of these methods have been in use for a long time; others are the result of the possibilities offered by modern electronics. Every method has its own charm and has an influence on the manner in which a sport is experienced.

The traditional "quickie" of 5 minutes per person is different from 3 minutes using "Delay" or "Bonus" in which every move attracts an extra 3 seconds of thinking time, although the total thinking time for a game is hardly any different. We recommend players to experiment with the various methods which the DGT 2010 offers. It can add an extra dimension to a favorite sport.
1. Time Rapid and Blitz (Options 1, 2 and 3)
This is the simplest way to indicate time. Both players are allocated one period in which they must make all moves.

2. Time + Guillotine (Options 4 and 5)
The first period is used to play a predetermined number of moves. The second period, the Guillotine, is used to complete the game. 1 Period + Guillotine is similar to Rapid and Blitz but with a slower start. Notice that the guillotine time is added when one player used all first period time (not after the completion of e.g. 40 moves).

3. 2 x Time + Guillotine (Options 6 and 7)
For an even quieter start it is possible to play a game with two periods before the Guillotine. Notice that the second and guillotine time are added when one player passes zero time.

4. Time + Repeating Time (Options 8 and 9)
A quiet end to a game also has its advantages. The simple traditional clock gives the players repeated one-hour periods in which to complete a subsequent number of moves.

5. Bonus ("Fischer") Options 10-21
The Bonus method (or "Fischer") is a timing system, where for each separate move to play, a bonus time is added to the available time. This method gives the players always the possibility to continue a game, even when much time was spent in earlier moves. It is possible to obtain increased thinking time by completing a move in a time which is shorter than the extra time allowed. The total time increases with the bonus time that is not used. Notice that the bonus time is already allotted for the first move. In all Bonus options: If a player has used the last period playing time, and no time is added anymore, the clock stops, and also the clock of the opponent blocks and can not set to count down anymore. End of the game!

5a. Time + Bonus ("Fischer") Options 10-12
When the first player reaches zero time in the first (Time) period, both players enter Bonus period, and receive the second period time. The bonus time is added at finishing each move.

5b. 2 x Time + Bonus ("Fischer") Options 13-14
When the first player reaches zero time in the second (Time) period, both players enter Bonus period, and receive the third period time. The bonus time is added at finishing each move.

5d. Bonus tournament (Options 19-21)
The Bonus tournament method is the most complex in the way thinking time is regulated. It features up to 4 periods of main time, during all, the bonus time is added for each move. The addition of the next period main time is either done when a player passes zero time or when a player finished a programmed number of moves. In the preset options 19 and 20, each with two time periods, the second period starts when one player used all the first period time, and passes zero. Both players receive the second period Basic time added on that moment. The option 21 (Bonus tournament 4 periods) allows the programming of 4 periods, with different basic time, all with the same bonus time per move. For the periods 1 to 3, a move number can be programmed. If the move number is set to a non-zero number, the next period time is added when a player finished the programmed number of moves for that period. If the move number is programmed to the value 0 (zero), the transient to the next period takes place when a player passes zero time.

If a player does not finish the programmed (non-zero) number of moves for a period, at passing zero time, the blinking flag is shown, and the DGT 2010 stops time counting for both players, indicating that the game has ended. That player loses the game!

For the correct working of the move counter driven Bonus Tournament option, the players are obliged to correctly stop the clock after each finished move, so that the clock keeps track of the played number of moves. Always ensure that the lever is in the correct position and the player color icons are correct before a game begins.

7. Time + professional byo-yomi (Options 26, 27 and 28)
From its very nature the game of Go lends itself naturally to allowing players extra time to complete a game. Traditionally, the byo-yomi method is used for this. Byo-yomi gives the player who has used up his thinking time a fixed amount of time for each subsequent move. In normal games of Go the principal thinking time allowed is 1å? to 2 hours, usually combined with a byo-yomi of 20 to 30 seconds. After the principal thinking time has been used the clock jumps to byo-yomi time. Each time a player completes a move the clock jumps back. If the player has not completed the move before the clock reaches 0 a flag appears in the display. For top matches the principal thinking time can be 9 hours which is followed by 5 byo-yomi periods of 1 minute each. At the end of the 9-hour period the clock jumps to 5 minutes. If the player completes a move before a time of 4 minutes is reached the clock jumps back to 5 minutes. If he completes a move after the 4-minute period has been exceeded, the clock reverts to 4 minutes. The clock thus reverts each time to the beginning of the current byo-yomi period.

Note that the icon "byo-yomi" is shown in the display as soon as a player enters the byo-yomi phase. The flag sign is not shown yet, the flag sign is shown when a player reached zero, during byo-yomi. The game can go on, the flag is cleared when the players next turn starts.

8. Time + Canadian byo-yomi ("Overtime") Options 29, 30
Canadian byo-yomi offers a simplified version of professional byo-yomi. It allocates extra time to complete a higher number (5 to 25) of moves instead of extra time per move. After passing the first period (TIME), the byo-yomi time is given, and the byo-yomi icon is shown in display. When the agreed number of moves are made, the players clock can be reloaded with the byoyomi time by pressing the - button for 1 second.

9. Hourglass (Options 31 and 32)
A player's thinking time is gradually reduced while at the same time that of his opponent is increased. This way of playing is an exciting alternative to the traditional "quickie". The clock stops when a player reaches zero, thus losing the game.

10. Gong (aka "Lightning") Options 33 and 34
Before the introduction of clocks with double timers, tournaments were often controlled with a gong. The gong was used to mark a fixed time for each move. Option 33 provides a fixed time of ten seconds alternately for first the left-hand player followed by the same amount of time for the right-hand player, and so on.