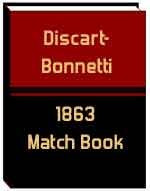 Here is your chance to experience chess as it used to be - or might have been! In January of 1863 a match took place in Modena, Italy, between Francesco Discart and Cornelio Bonetti, using the old Italian rules of chess. Castling was "free" style, en passant pawn captures were disallowed, and a pawn could only be promoted to those pieces already captured! All 15 games of this great match are annotated by Discart himself, and much additional material is included.

Some of the games feature exciting and Romantic chess, although not all of them are characterized by 21st century "correct" play. This match, overall, is in line with 19th century Italian standards. We must recall that Discart's chess career was well established when Morphy appeared, and Steinitz had only completed his first tournament when the Discart-Bonetti match was played. In that pre-computer era, the chess style and technique of those enthusiasts was, certainly, imperfect. Yet even in the present age of silicon super computers, we hold that the accomplishments of 19th century players ought to be appreciated, those masters who were not professionals, and that even now we can enjoy their genuine talents at tactics and combination. This high Romantic style offers a very straightforward game of chess, but also lively and ingenuous, which should be treasured for its own sake - even if the games cannot be found in the latest Informant.

This important match has been carefully translated into ChessBase format, with all of the modern features you've come to expect. Besides the 15 match games with Discart's commentary, this e-book includes:

* Four text documents, with biographies of both players
* Several supplemental games by Discart and Bonetti
* Compositions by Discart
* Scans of newspaper clippings, theme Key, even a drawing of Discart himself

Francesco Discart was the fourth great Modenese master, "the Italian Anderssen," and his games are a source of pleasure and instruction even now. Order your copy of the Discart-Bonetti Match today!