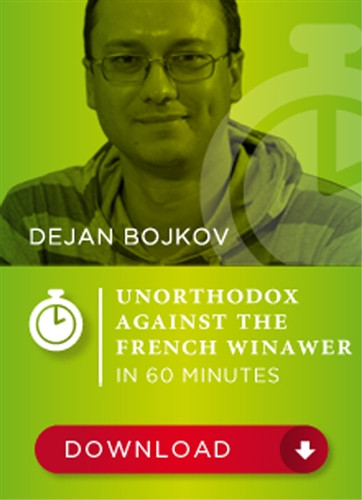 Using the blue "Buy Now!" button will take you to ChessBase Store
where you can purchase this Download in a secure environment. It is simple and fast. You will have your new Download within minutes!

The French Defense is an aggressive and tough opening. Typically, the second player shows his ambitions as early as move three in the main line - after 1.e4 e6 2.d4 d5 3.Nc3 Bb4 - the Winawer Variation. Black's intentions are clear: pressure in the center, and quick development. Black also do not mind trading his Bishop for the Knight, spoiling White's pawn structure. In many cases this will lead to closed positions in which Knights might prevail. And we should not forget the extremely sharp lines in which Black can sacrifice his whole King's flank. Then why not spoil these plans straight on move four? The continuation 4.Ng1-e2 develops a piece, and keeps the pawns intact. What is more important, the resulting positions are unusual for the typical French player and contain a lot of venom.

Check the new Learn in 60 minutes to find a repertoire based on the move 4.Ng1-e2. The author GM Dejan Bojkov for example used it to win a crucial game at the Canadian Open Championship 2011, which helped him share the win at this prestigious event.