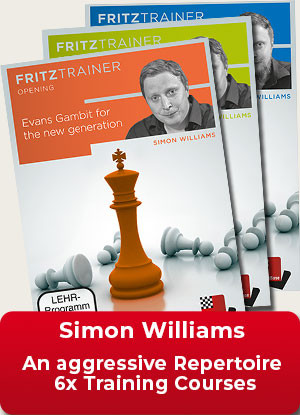 Get 6 Simon Williams Gambits in One Steal of a Deal! - Chess Training Downloads

This download concentrates on the King's Gambit accepted with 3.Bc4. Bronstein once said about this move, "You want to play the King's Gambit? Well, Black can draw after 3.Nf3. Play 3.Bc4 if you want to win!" Of course things have developed a lot since Bronstein's time, and this DVD aims to bring people up to speed with all the latest developments and new ideas that are playable, with both colors in this fascinating variation. I have included a lot of novelties and interesting attacking variations that should attract any attacking player, looking for an interesting way to meet 1...e5! With the Berlin opening now leading to dull equal positions, it may well be time to start taking a look at the King's Gambit in more detail. The opening leads to crazy interesting positions, where Black is placed under pressure from move two.

Simon Williams became a IM in 1998 and a GM in 2008. For the last 15 years he has concentrated on teaching, playing and making instructional chess DVDs. His playing style is very aggressive, preferring attacking chess to positional grinds, hence why he is perfect for DVDs on the King's Gambit and Mazing Moves! He is the author of numerous chess books. His first chess book. "Play the Classical Dutch" got voted, in New in Chess, as one of the top 10 chess books of all time.

The Black Lion - an Aggressive Version of the Philidor Defense (Download)

This opening, first brought into the limelight by Dutch amateur players Jerry van Rekom and Leo Jansen, now gets the Grandmaster treatment. Grandmaster Simon Williams suggests a simple to learn, yet deadly system of development for Black. Simon explains the main ideas of this opening in an easy and entertaining manner, using examples from such maverick players as Baadur Jobava. In what other opening do you get a chance to attack White’s castled King with an early ...g5? Let the Lion roar and the fun commence!

The Evans Gambit for the New Generation

Opening with the Chigorin Defense (1.d4 d5 2.c4 Nc6) shows your intention to play for a win right from the outset. After 2...Nc6 Black’s pieces fly into the game putting pressure on White’s position from a very early stage. This opening is ideal for the type of player who strives for an unconventional yet attacking game right from the start. Named after the 19th century Russian Grandmaster, Mikhail Chigorin, who was one of the only top GM’s to prefer Knights over Bishops - and this opening puts that preference into practice! The Chigorin has also been employed by a number of modern day mavericks, Alexander Morozevich and Richard Rapport being two notable names.

This chess software will take you through all the things you need to know in order to play this opening in a fun and exciting way. Simon Williams describes all the main concepts that you will need to know; so even if you forget the actual moves you will have the right reasoning already imprinted in your mind. There is lots of fun to be had with this chess opening, and you will also be a stronger player after watching.

The Budapest Gambit is an exciting and fun way to play against 1.d4 and 2.c4 – replying with 1...Nf6 and 2...e5. In this video you will learn how to pose problems for White with this fascinating opening. Exploring the strength of this opening has been an exciting journey for me. When I started to get interested in this underestimated opening I knew very little but now books and articles about this exciting opening take up a lot of space in my office. Then the fun started… Analysing this material I started to see the beauty and strength of the Budapest. In fact, I was surprised, how good this opening actually is! On this DVD I share my findings with you. Join me on my journey to discover the strength of the Budapest Gambit.