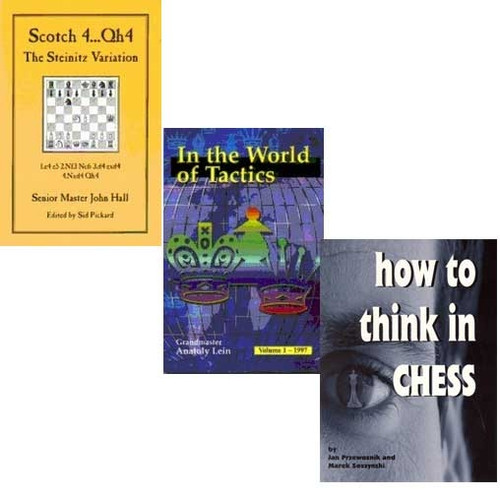 How to Think in Chess

What wins chess games? More than anything else, it is organized and efficient thinking. But chess thinking is specialized. Even Albert Einstein was a confessed chess duffer. It's not so much how smart you are as how smart your chess-thinking techniques are. The effects of memorizing moves, one of the most widespread attempts to improve, pale beside the results of learning how to think effectively in chess. How to Think in Chess is the rare book that explains in clear terms the techniques chess masters use to find their moves.

The authors, an international chess champion and a trained professional thinker, are uniquely qualified on the subject. They offer you both academic research and personal experience. How to Think in Chess teaches you practical ways of thinking to win a chess game. You'll see how to assess your thought processes during chess play and how to reorganize them in practice. You'll get exercises to increase your thinking skills. You'll see how to use elements of sports psychology in your preparation. How to Think in Chess gives you techniques to analyze and improve your own chess thinking; methods to foster creativity; over 200 specialized chess exercises to strengthen your game; advice on setting goals and coping with stress; and techniques to overcome mental blocks. "How to Think in Chess can reveal a great deal to a player who wants to improve, a chess teacher who wants somebody else to improve or even a psychologist who just wants to observe the thinking brain in actionåÓ -from the foreword by International Grandmaster and journalist Jon Levitt.

There is no "quick fix", a magic wand that will instantly and easily add 300 points to your rating. But if you are willing to apply yourself to the study regimen advocated by the authors, you will surely improve your game. When it was released in June 2001 it became an instant best seller. Here is a chance to pick up one of the fine one-volume training manuals of our time.


In the World of Tactics

In the World of Tactics is the only collection of each year's finest chess combinations. See today's top-rated Grandmasters (including the World Champion!) conjure their tactical wizardry at "crunch time," in the toughest elite tournaments of 1997. Each diagram shows the decisive moment, when either careful precision is required, or else all the subtlety of a hammer-blow! Best of all, Grandmaster Anatoly Lein's renowned analytical spotlight illuminates the hidden variations, revealing why tempting alternatives were never played. The year's sharpest encounters, explained by a veteran professional Grandmaster.

In the World of Tactics is the perfect substitute for those endless magazine subscriptions, newspapers, bulletins and databases. Grandmaster Lein has selected the most instructive combinations of the year, gathering the very best of 1997 into one convenient and inexpensive volume. Want an overview of the year's top tournaments? Collecting tactical positions? Just looking to get better? Forget that dreary sifting and searching through reams of information, and let Grandmaster Lein cut through the clutter - you can't lose!