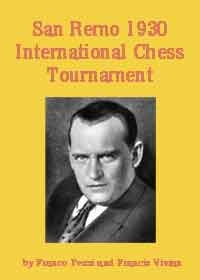 by Franco Pezzi and Francis Vivian

Hosting a round robin international chess tournament by day, the casino was given over to balls and dance parties. Whatever distractions may have presented themselves, the plain facts are that between January 16th and February 4th, Alexander Alekhine scored 14 points out of 15 possible, winning 3.5 points ahead of second place Aron Nimzowitsch, and taking the grand prize of 10,000 lire. Unprecedented, and more than 80 years later this event remains the most impressive chess competition ever organized in Italy. At the time these chess games captured headlines around world, and today's players still acknowledge them as classics in the literature of world chess.

Just as the 1930 San Remo chess tournament will always repay study, this chess tournament book is an outstanding account, and includes player biographies with many colorful details and insights. There is excellent commentary for each game, and whether by contemporary Grandmasters or the players themselves you'll find topical and well-chosen notes. Highly recommended!

Notwithstanding the presence of strong players like Rubinstein, Nimzowitsch, Bogoljubow, Tartakover (just to name the most famous), Alekhine dominated by a large margin, 3 and a half points, over the runner-up, Nimzowitch. His superiority over his opponents is highly esteemed and widely considered almost unrivalled, in other tournaments.

This tournament includes many interesting games worthy of accurate analysis, but one of them merits particular attention. It is the match held during the fifth round between Bogoljubow, a giant of the international chess world, and the Italian Champion Mario Monticelli. Among the millions and millions of games played over the chessboard in the world, the Bogoljubow-Monticelli  match stands out in  history as an example of courage, depth of calculation and fantasy, and is worthy of being included in the hall of fame of "a hundred games to save".

Another interesting game we suggest the reader to take into consideration is the one played by Vidmar and Yates during the fourteenth round. Alekhine described the match "as the finest game played since the war".

You maybe wonder why I chose to entitle the book "Focus on San Remo 1930: International Chess Tournament". It is well known that during every game a few moves, at times one or two only, decide the final result. What attracts spectators is the strategic importance of playing one piece instead of another one or the tactical significance of choosing a series of moves as well as sometimes the small but absurd mistakes that help opponents win the game.

These decisive moments are outlined and commented under the section "focus", to prompt readers to concentrate their attention.

I chose to make quotations of meaningful and important comments made by Grandmasters of those days and I made use of a software chess play tool that helped me analyze more deeply and in an interactive way the games and evaluate the developments that most amateurs and sometimes even expert masters overlook during chess play. Chess Play, which is not only leisure, but sport, art and science!

Requires ChessBase 6.0 or higher, Fritz, or the free ChessBase Light which can be downloaded at no cost.

Please read our ChessCentral E-Book FAQ before ordering. Downloads are not refundable.