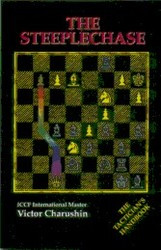 This fifth installment of The Tactician's Handbook turns to pawn combinations. Extreme pawn combinations! The Steeplechase is a foot-race through obstacles, and here Charushin treats us to the spectacle of a lowly pawn surmounting barriers and overcoming pieces, headlong in its tactical dash for the finish line. A high stakes capturing race, a pawn charge under the enemy gauntlet, a forced march to the Queening square - that's the Steeplechase! Over 200 examples reveal advanced pawn tactics like Excelsior, a stunning quick-march from the pawn's initial square to the 8th rank. Or the mutual Steeplechase, in which the players seem to ignore one another, each pushing his own pawn forward. Chapters cover the Steeplechase in history, in openings, in compositions; there's even a chapter on Alekhine's use of the Steeplechase. Every page recalls Philidor's maxim that "pawns are the soul of chess," and now we know why! This volume elevates pawn play to an art form, and Charushin's unique vision of pawn power makes The Steeplechase an unforgettable experience!

The Tactician's Handbook is a ground breaking study of combinations in chess. Each volume presents what Charushin has called a single-image combination, a solitary tactical element examined in depth, to be mastered and applied with confidence. Taken together, this series uncovers a remarkable class of combinations hitherto unexplored - yet the central idea of these tactical templates can be understood immediately, as if by intuition or some non-linear psychic impressionism! The effect is most pleasing, and offers a new aesthetic in the realm of chess tactics. In Charushin's compelling world of combinational vision, to See is to Know! Join our growing band of initiates, those who develop their "second sight" in chess, and start training with The Tactician's Handbook.