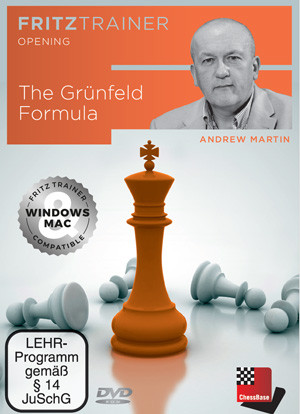 The story goes that a low-rated player once bravely asked Viktor Korchnoi his advice about what opening to play against a stronger opponent. “Play Grünfeld” was the grumpy reply. “Play Grünfeld against everything apart from 1 e4.” I have no way of verifying this story, but it certainly inspired me to think about whether this was possible and the end result is this new ChessBase course.

Naturally, a universal approach using ...Nf6, ...g7-g6, and ...d7-d5 as the base would be very useful for players of all classes, saving time and energy and promising a fluid, dynamic position. I’ve found Korchnoi’s advice to be mostly true, but there are a few important exceptions when Black can do better than just trot out the Grünfeld Formula. Look out for those differences!

This is a course full of opening ideas and suggestions for Black, against all of:

Andrew Martin is an English chess player with the title of International Master. He has won various national and international tournaments and was a commentator on the chess world championship between Kasparov and Kramnik in 2000. He is known as a professional chess teacher and head trainer of the English youth team. He is a chess columnist, an author of chess books and the author of various instructional videos. He was the publisher of the series Trends Publications. Andrew Martin has recorded extensively for Chessbase since 2004.System requirements: