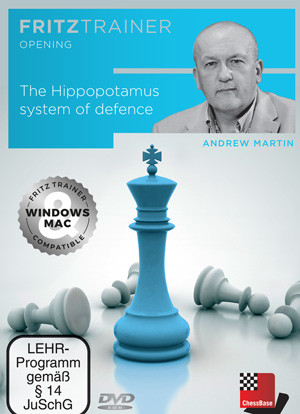 What is the Hippopotamus system of defense? The idea is that, at the beginning of the game, Black develops within his own first three ranks. He constructs a solid, flexible, and hopefully stable position while awaiting events. At the right moment, he will strike back! The Hippopotamus was given the name by an eccentric English amateur player JC Thompson, back in the 1950’s. It seems as good a name as any. Given the right conditions, Black will emerge from the chessboard swamp and crush all before him.

Many strong players have taken a liking to the Hippo, including such greats as Boris Spassky and Gata Kamsky. Here we have an anti-theoretical opening, which has allowed them to draw on experience, rather than the need to remember long move sequences. It’s worth pointing out that White may play in Hippo-style too. On this ChessBase video course IM and FIDE Senior Trainer Andrew Martin maps out a game plan for the Hippo user and shows how the opening is played in the present day. It is an exciting tour of some very unusual chess.