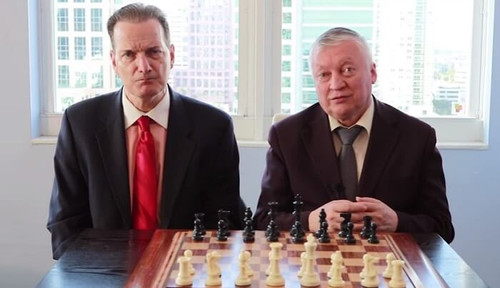 "The Karpov Method" – A World Champion Reveals His Secret to Chess

Former World Champion and living legend Anatoly Karpov has just released his 15 hour Master Method video course - and we've managed to get you a 50% discount.

In this extraordinary 15 hour course, former World Champion Anatoly Karpov has put together the definitive training program on his approach to chess mastery. Focusing on positional play, strategy, and endgames, The Karpov Method takes you into the inner circle, revealing Anatoly’s discoveries and some of the chess’ deepest secrets.

This is a rare opportunity to learn directly from one of the greatest players of all time, as Anatoly Karpov talks candidly about his games, opponents and the method he used to solve problems at the board. A true pioneer of the game, Karpov introduced strategic ideas, refined techniques and astounded the world with his masterful play. Now the 12th World Champion teaches you how to follow in his footsteps with an unforgettable tour of hidden chess truths.

In the Karpov Master Method, Anatoly Karpov and GM Ron W. Henley explain in an easy-to-understand way many of the strategies and tactics that brought Karpov success at key moments in his career.

Some of what you’ll find in The Karpov Method:

•    World Champion thought process: What did Anatoly see that convinced him to defy all chess principles and still crush Kasparov? How did he find the astounding Bishop move described as a “quantum leap in strategic play”? Find out from the man himself!
•    Karpovian conversion. An advantage only means something if you can convert it into a win. Karpov is the master at this and gives you a ton of systematic ways to turn superior structures, activity and other edges into emphatic victories - often ending with spectacular finishes like Qe5+!!
•    Endgame maestro. Karpov teaches you the techniques and ideas that made him one of the greatest endgame players of all time. See how he applied key square control, timed transition and barriers to dismantle Anand in one of the most impressive and instructive endgames you’ll ever see!

And it doesn’t stop there. The Karpov Method is loaded with stunning bonuses!

•    Karpov on Fischer: Nearly 4 hours of Karpov revealing the secrets of Bobby’s greatness with analysis of his best games.
•    Karpov on Kasparov: Incredible insight into 3 of the World Championship matches between the “eternal rivals” (4.5 hours).
•    Karpov’s Best Games: Another 6 hours of superb game analysis as Karpov explains his thought process step-by-step in the games chosen by The Informant as his best ever.
•    Exclusive in-person interview (50 minutes): Karpov sits down with GM Ron Henley and opens up about everything: Kasparov, “the match that never was” against Bobby Fischer, Carlsen vs. Caruana and tons more. Incredible!
•    Play like Anatoly Karpov: An exclusive 386 page eBook on Karpov’s games, style, openings and favorite techniques, written by GM Ron Henley and only available as part of this course.
•    3 Karpov game files: ALL 120 featured games from the course, with commentary, plus the huge 1,260 Karpov game database.

We can only keep this offer available until Sept 27 though so click here to get your copy before the discount disappears.