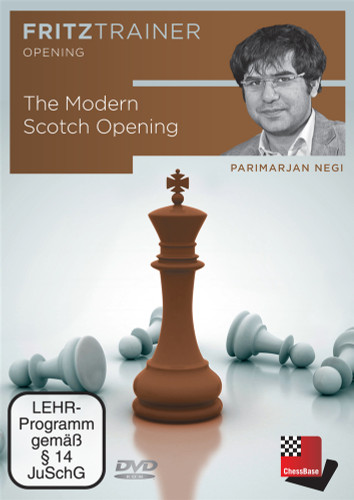 The Modern Scotch Opening: A View from Both Sides (Download)

This download is immediate. You will get your download link and activation key immediately in your email. No waiting, shipping cost, or VAT. The download is about 1GB so it will take a few minutes to download. Let us know what you think. Please note: PayPal purchases must be hand keyed and may take 24 hours. Enjoy!
The Scotch has long been associated with exciting play, although people often doubt it's positional base. But the opening has evolved from the swashbuckling games of the 19th century to become a sound, but aggressive, alternative to the evergreen Spanish. In this Video Download, we look at the latest revolution in Scotch theory that has completely changed white's plans, and once again brought back the interest of the world's elite. We also look at a dynamic way for Black to counter this latest trend.