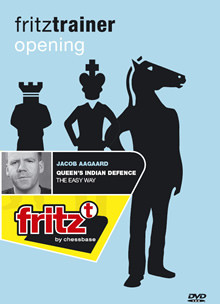 After 1.d4 Nf6 2.c4 e6 White players often play 3.Nc3 allowing the Nimzo-Indian Defense. But what happens if White plays the just as natural 3.Nf3? On this Video Download IM Jacob Aagaard follows up on his Video Download on the Nimzo to by giving a recommendation based on his own repertoire with the Queen's Indian Defense: 3...b6. This system is a favorite of Adams, Anand, Leko, Polgar and many others of today????s chess stars. It is well known for mixing active and natural play with positional soundness. Running time: 3 h 49 min.

Jacob Aagaard is born in Denmark but lives in Scotland. He has written a numbers of critically acclaimed books, where Excelling at Chess won the ChessCafe.com book of the year award 2002, and recorded a few Video Downloads for ChessBase, including Attacking Play 1 & 2, and Basic Positional Ideas.

His work is well know for a mixture of lame humor and easy to follow explanations. Jacob's best result as a chess player is scoring three Grandmaster norms in five tournaments in 2005.