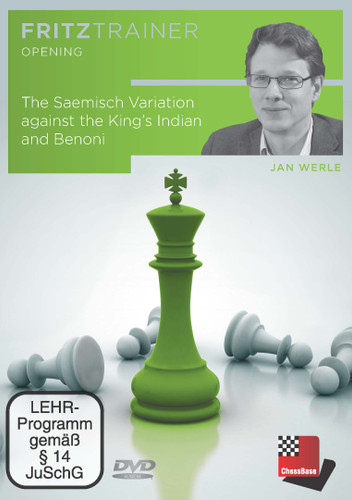 Beat the King’s Indian and Benoni structures with the impenetrable pawn phalanx g2-f3-e4-d5. Encounter your opponent with sound and fresh ideas in this classical rebooted line of the Saemisch! The center is stabilized with the move f2-f3, and a possible expansion on the Kingside is also prepared. Thus it is usually White who gets the attacking chances against the King. Since Benoni is structurally very similar to the King’s Indian with ...c7-c5, many plans and motifs can be transferred here. You can then test both your theoretical knowledge as well as look at typical ideas in model games in the numerous accompanying interactive videos.

GM Jan Werle is a professional chess trainer, coach and author. In 2008 he became EU-champion in Liverpool and reached his peak rating of 2607. Hereafter finished his law studies obtaining two master law degrees (civil and commercial law) before he commenced with his job as a lawyer. However, his main passion, chess, prevailed and led to a comeback. He is, inter alia, giving chess lessons online to pupils worldwide, but also in schools. He enjoys to help and teach his students and to watch them improve. He combines the teaching with the playing of tournaments, keeping up his own level.