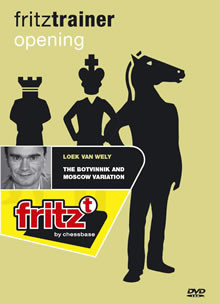 In this Video Download, top Grandmaster and six-time Dutch champion Loek Van Wely presents both the Botvinnik Variation and the Moscow Variation of the Slav Defense, two extraordinary opening systems renowned for their extreme sharpness and complexity.

The Moscow Variation - 1.d4 d5 2.c4 c6 3.Nc3 Nf6 4.Nf3 e6 5.Bg5 h6 6.Bh4 dxc4 7.e4 g5 8.Bg3 b5 (D43) results in a dynamic position where tactics are always on the agenda. Van Weely's experience on both sides of this variation reveals the fascinating contours of this modern battleground. Even players who don't intend to adopt the mentioned systems in their own practice (but who knows?) will doubtlessly extend their chess understanding by Van Wely's presentation. Video playing time: 5 h 30 min

Born in 1972, Loek van Wely learned chess at the age of 4 and was soon recognized as one of the greatest talents in the Netherlands ever. After becoming Grandmaster in 1993, he steadily climbed up the Elo ladder to reach a peak of 2714 and a place among the top ten in the world in 2001. From the years 2000 to 2005, "King Loek" won the Dutch national championship six time in a row. His reputation as an uncompromising fighter with a merciless will to win make him a most welcome although feared guest in tournaments all over the world. Among van Wely's greatest successes are his triumphs at the Berlin Open in 1991, the World Open in Philadelphia in 1992 and the New York Open in 1995. In 2005, he was the top board of the victorious Dutch team at the European team championship in Gothenburg.