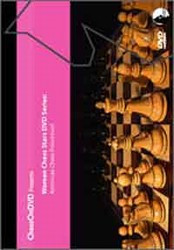 No junior chessplayer will want to be without this chess DVD starring Irina Krush (1998 US Women's Chess Champion!), Elina Groberman (2000 US Women's Co-Champion), Laura Ross, and Shirley Ben-Dak! America's Chess Princesses have made a chess video that can be enjoyed by students of all ages

The young girl, clutching a teddy bear, stepped up to the tournament director's table. Her father hovered behind her, holding her chess set and scorebook. The father presented his nine-year-old daughter's USCF membership card to the tournament director and waited for him to fill out a pairing card for her. A group of us stood nearby, observing the scene with some amusement. "What a cute kid," we agreed. "She's probably here for the scholastic event."

She doesn't look too confident - probably hasn't been playing long."

We heard the tournament director ask the girl's father her rating."1765"

The tournament director, the girl, and her father were startled by the sudden outburst of choking, coughing, and gagging sounds from the cluster of adult male chessplayers who were standing nearby. Several of us were subsequently beaten rather badly by her during the course of the tournament.

A lot of chessplayers have had similar experiences and it tends to make one a bit phobic about talented young players. We don't want to play them, we don't want to even think about them because of the unpleasant feelings of inferiority such thought engenders.

So when I received the latest review package of DVDs and saw the contents, I couldn't help but groan audibly. "Awwww, not this!"

Inside the package was the double video set: "American Chess Princesses!" Fortunately for me, my own kids were home for Christmas break so I could delay watching the DVDs for a few weeks.

Now that I've viewed the videos I'm genuinely sorry that I waited. This two DVD set is surprisingly good and [gasp!] I actually learned a few things from the games!

The featured chessplayers on this DVD were the U.S. representatives at the 1997 FIDE World Youth Championships, and all of the games on these tapes are from that competition. These young ladies are truly talented and their insights on their games make for some interesting viewing.
The first young lady featured on the DVDs is the extremely talented Irina Krush. For those who have been living in a cave for the last few years, Ms. Krush is the 1998 and 2007 U.S. Women's Champion and is arguably the most talented teenaged chessplayer in the United States. She's been in the media spotlight quite a bit. She's gained quite a bit of experience from the exposure and it shows on this DVD. Her presentation and delivery is easily the most polished among the ladies featured in this series.

Her games are quite remarkable and are the most instructive to stronger players who view these DVDs. Three of her games are featured. I was particularly struck by her game as White against Kosteniuk, which had a very unusual opening:
1.d4 d6 2.c4 e5 3.Nf3 e4 4.Ng5 f5 5.g3 Be7 6.Nh3 c6

I thought the opening moves to be very odd. Imagine my surprise when I actually found another game in my database using this variation! It appears to be a mutant variation of the English, and Irina certainly made the most of what started out as an unenviable situation.

The next player featured on Part One is Shirley Ben-Dak, who played in the Girls U-10 section. She has two games on the DVD. Ms. Ben-Dak appears to be a bit camera shy; the DVD's host, Ron Henley, has to prompt her a bit to talk about her games. But her personality really shines through toward the end of the second game as she discusses her winning plan. She flashes a million-dollar smile as she talks about what she was going to do to checkmate her opponent. Her enthusiasm for chess is quite endearing (once she finally loosens up a bit), especially to those of us who work with children as chess teachers. I hope that all the kids I work with will be as enthusiastic about chess as is Shirley!

The third young lady featured is Elina Groberman, who played in the Girls U-14 section. Ms. Groberman is a very personable young lady and formidable endgame player. I personally found her games to be the most instructive of the lot. The last game on Part One is hers, and Part Two picks up with two more of her games.

Elina has a very interesting style of play. She tends to fare a bit badly in the opening but equalizes or comes out ahead in the middlegame. But the endgame is where she truly shines. Her insights into endgame technique are astounding, especially coming from a player so young. Pay particular attention to her handling of the difficult Queen-and-pawn ending. She masterfully avoids her opponent's efforts to draw and winds up pocketing the point. Another game features a minor-piece-and-pawn ending (Bishop vs. Knight) in which the technique of corralling the knight is shown not just once but twice in the side variations to the game.

I was very entertained by Elina Groberman's games and learned quite a bit about endgame technique from them as well. It's extremely unusual to find a young player who is even interested in endgames, much less one who plays them as well as Ms. Groberman. Keep an eye on her - if she keeps her interest in chess, I have a feeling that she'll be going places.

The last player featured is Laura Ross, who was another U.S. player in the Girls U-10 section at Cannes. Although not as well-known as Irina Krush, Ms. Ross is making a name for herself: she was the most active female US chessplayer in 1997, playing 190 tournament games.

Four games of hers are featured on Part Two and they are a veritable clinic on attacking chess. Laura has no problem with sacrificing material for an attack and she knows a great deal about attacking the castled king. One of her games was a Goring Gambit and the other three are Sicilian Grand Prix attacks (her bread and butter, judging from the remarks on the video). The four games are enormously entertaining; I actually cheered at several points during the games. She's quite an enthusiastic young lady as well and obviously has a sense of humor. I cracked up at a few of her remarks. She's a strong attacking player and seems to be a pretty nice kid (and not at all shy in expressing her opinions). Any young female players in your family could do a lot worse than to adopt Laura Ross as a role model. These games and her analysis of them are an absolute delight.

The technical aspects of the DVD are much as I described in my prior review of the Alexei Shirov series. The board is very easy to see compared to some of the other chess DVDs I've viewed. The sound quality is acceptable, though the frequent sound edits are still a bit jarring.

One might want to keep a chess set handy for following some of the games (Irina Krush's in particular). It's also useful to check your database for the games and make a printout to help you keep track of the main line position while the variations are played out on the TV screen (again, this applies more to Ms. Krush's games than those of the others).

This is also a good DVD for the young chessplayers in your family to show them that children and young teens can be highly successful at chess with some work and a bit of determination. I also think that this is a good collector's DVD. Irina Krush is already a very well-known player (she's been on the cover of Inside Chess for the last two months in a row as of this writing) and I truly believe that Elina Groberman will develop into a force to be reckoned with in the future. Should that come to pass, these DVDs could become sought-after collectors items as they are a fascinating glimpse at a stage in the chess development of some promising young players.

And players like myself and some of my friends, who were previously a bit unnerved by playing a highly-rated youngster, might change their views a bit and look at their tournament pairings with such young people as an unique opportunity for improvement and not as a cross to be borne.

No junior chessplayer will want to be without this chess DVD set starring Irina Krush (1998 US Women's Chess Champion!), Elina Groberman (2000 US Women's Co-Champion), Laura Ross, and Shirley Ben-Dak! America's Chess Princesses have made a chess DVD set that can be enjoyed by students of all ages.