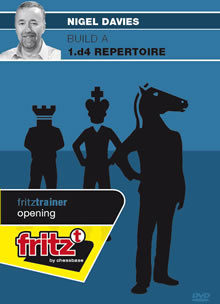 Chess players who wish to make the switch from a King-pawn based repertoire to a 1.d4 repertoire face a daunting task. A player making this change isn't just learning a new opening, or even a new system - one is almost starting over from scratch and learning the basic ideas of chess openings anew.

Compounding the problem is the fact that most players have limited time for chess study. Trying to "rush the job" by learning as many new openings as one can as quickly as possible simply leads to confusion (and the consequent poor results).

GM Nigel Davies addresses this problem on the Fritz Trainer Video Download Build a 1.d4 Repertoire by suggesting a "building block" approach. Players following Davies' recommendations will begin by learning a basic Queen Pawn opening such as the Torre Attack or the London, and then "layering on" additional openings in an organized manner. The videos on this Video Download will illustrate how to accomplish this in an easy and confusion-free manner.


Nigel Davies has been an International Grandmaster since 1993 and is a former British Open Quickplay and U21 Champion.