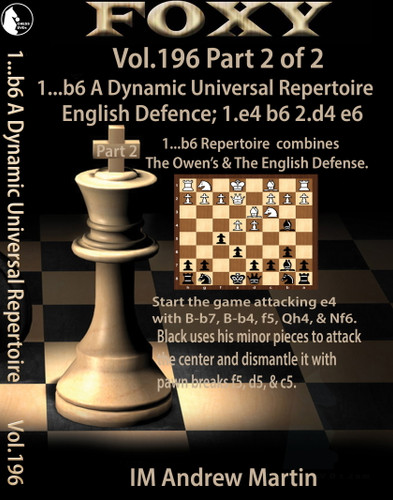 1...b6, A Dynamic Universal Repertoire: The English Defense (Download)
Part 2

A lifetime repertoire that you don't need a lifetime to learn!

The Owens Defense (1.e4 b6 2.d4 e6) and English Defense (1.d4 b6 2.c4 e6) form an opening system which is relatively unknown, and which offers your opponent many chances to go wrong. In essence, White will gain a broad pawn center which Black will set about undermining.

Black intends to control the center with minor pieces, and to dismantle White with the pawn breaks ...f5, ...d5, and/or ...c5, with speedy attacks from the start. Black's plan is easy to remember, following up by ...Bb7, ...Bb4, ...f5, and ...Qh4 or ...Ne7. He often develops Bishops before Knights and brings out the Queen early.

So is 1…b6 the final frontier of opening theory in our computer age? The positions that we reach are fresh, original, and remarkably diverse - and Black scores 51% to 65% in most lines! In addition, 1...b6 has been played at the highest level in chess, including these top players: