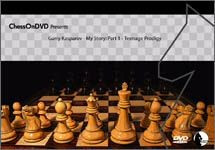 Garry Kasparov:
My Story on DVD
Part 3: Rebels and Renegades

A close look at Garry Kasparov's career reveals a remarkable amount of sheer brinkmanship. At a time when the Soviet Union was wired with paranoia and run by invisible connections, the winds of political change were beginning to stir and the brash renegade Kasparov would be in the right place at the right time to capitalize on the new climate.