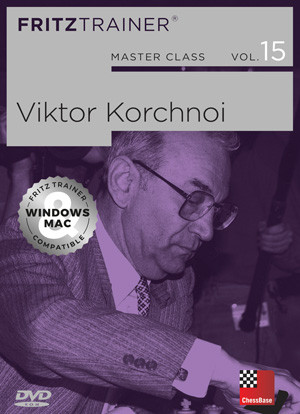 Viktor Korchnoi (born in 1931 in Leningrad) is one of the great players in chess history. He first qualified for a Candidates Tournament for the World Championship as early as 1962, and subsequently took part many times in further Candidates Matches. His final candidates match was against Kasparov in 1983. For decades Korchnoi belonged to the absolute world elite. In the late 1970s he was number two in the world rankings behind Anatoly Karpov.

After Korchnoi fled the USSR as a dissident in 1976, he engaged in two exciting and politically heated competitions for the world championship against Karpov, in 1978 and 1981. In 1978, Korchnoi lost by a narrow margin. He continued to play at a high level in many tournaments well into his later years. He cultivated a very combative, concrete style, and was a master of defense. He gladly accepted sacrifices, or won and then defended a material advantage until victory. Korchnoi had outstanding knowledge of the endgame, and was probably the world’s best expert on rook endgames. In this video course, experts including Yannick Pelletier, Mihail Marin, Karsten Müller and Oliver Reeh, examine the games of Viktor Korchnoi. Let them show you which openings Korchnoi chose to play, where his strength in middlegames were, or how he outplayed his opponents in the endgame. Finally, you’ll get a glimpse of his tactical abilities in the Tactics section. This edition features an additional video by Yannick Pelletier, who looks back on Korchnoi’s life, and shares the memory of his experiences with one of the greatest players of all time.