A History of Chess Pieces and Chess Sets

In July 2002, an ivory piece less than 2 inches in size was discovered in Butrint, an ancient Mediterranean city in southern Albania. The piece is dated to 465 AD. If this is really a chess piece, then it is the oldest chess piece found anywhere in the world. It even pushes back the date of chess. The piece has a cross on top of it and was found in an old Byzantine or Roman palace.

The earliest known chess pieces (chatrang) were found at Afrasaib, near Samarkand in Uzbekistan. What was found were seven pieces consisting of a king, chariot, vizier, horse, elephant, and 2 soldiers. made of ivory. It is dated about 760 AD. A coin, dated 761 was found with the chess pieces.

The Mozarab chess pieces, also known as the pieces of Saint Genadio, may be as old as the beginning of the 10th century. The four small pieces were made of ivory and preserved in the Mozarabic monastary in Leon, Spain.

The oldest European chessmen may be some Italian chess pieces made of bone with ivory topping. It was found at Venafro, Italy and is dated about 980 AD. It is displayed in the Museo archeologico di Napoli. The pieces were discovered in a Roman tomb in 1932. The controversy is how to explain how it was possible that chess pieces of Arabic shape were discovered in a tomb of Roman age. Radiocarbon measurements yielded a date of 885 to 1017 AD.

The Isle of Lewis chess pieces were found in March, 1831 in an underground chamber on the west coast of the Isle of Lewis (Uig Bay) in the Outer Hebrides islands of Scotland. A local peasant, Calum nan Sprot, who was looking for his cow found a small chamber 15 feet below the top of a sandbank that had been partly washed away. The chess pieces, perhaps made in 1150 by the Norse, were made of walrus tusk and believed to be of Icelandic in origin. The shepherd was terrified by the expressions on the pieces and fled from the spot. He told his minister, Alexander MacLeod, who returned to the sight and exorcised the site, then sold the pieces (67 chessment and 14 plain draughtsmen) to the British Museum for 84 British pounds. 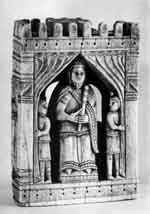 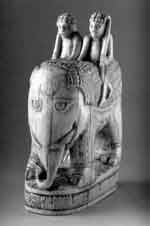 Another early chess set is the so-called Charlemagne chessmen, which is in the Cabinet des Medailles, Bibliotheque Nationale in Paris. It is a massive elephant ivory carving. Charlemage probably never played chess. The so-called Charlemagne chessmen was at the Saint Denis Abbey near Naples since the end of the 13th century. The pieces are dated around 1100 and were probably made in Salerne, Italy. The pieces may have come to Paris as a gift to French King Philip II or Phillip III. Both kings stopped in Salerne. In 1598 there were 30 pieces. In 1794, after the French Revolution, there were 16 pieces. The set consists of 2 Kings, 2 Queens, 4 Elephants, 4 Knights, 3 Chariots, and 1 foot soldier. 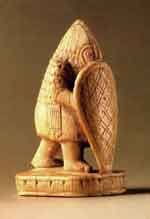 A piece that is part of the Charlemange set is a King Elephant. It carries an Arab (Kufric) inscription which translates as "made by Yusuf al-Bahilis." Its origin is India and it may not even be a chess piece. It has an Eastern leader being carried by an elephant, surrounded by a row of horsemen acting as supporters.

One of the first chess piece designs came from John Calvert in 1790. The King and Queen had openwork crowns, the Bishop had a deep clefted mitre, and the Rook was a tower on a pedestal. He produced his chess sets from 1790 to 1841.

In the early 19th century the most common chess design was the St. George chess pieces.

In early 1849 Nathaniel Cook, Howard Staunton's editor at the Illustrated London Times, designed the Staunton chess set at a time when players were refusing to play with each other's pieces because of the difficulty in distinguishing the various chess pieces. The main patterns prior to the Staunton pattern were the Lund, Merrifield, Calvert, Barleycorn, Selenius and St George patterns. Cook used symbols in their plainest form. The King had a crown, the Queen had a coronet, the Bishop had a miter, the Knight was a horse's head, the Rook was a castle, and the pawn was a ball. The horses' heads were based on the Elgin Marbles. These were designs found in the Parthenon frieze and taken to England by Thoms Bruce, 7th Lord of Elgin, in 1806. The pawns were developed from the freemason's square and compass. Every symbol was supported on a plain stem rising from a heavy, wide base which gave stability. The design so impressed John Jaques, leading wood carver, that he immediately suggested making the pieces on a commercial basis.

Jaques was a friend of the English chess master, Howard Staunton, who sanctioned the request that the design be called the Staunton chess set. John Jaques was also the brother-in-law of Nathaniel Cook. Jaques obtained a copyright for the design, registering the design under the Ornamental Designs Act of 1842, and began manufacturing the set in London. The wooden pieces were turned from ebony and boxwood and very heavily weighted. Some ivory sets were made from African ivory. King sizes were 3.5 inches or 4.5 inches (for match or tournament play). The first Staunton Pattern chess pieces from Jaques was offered to the public on September 29, 1849. 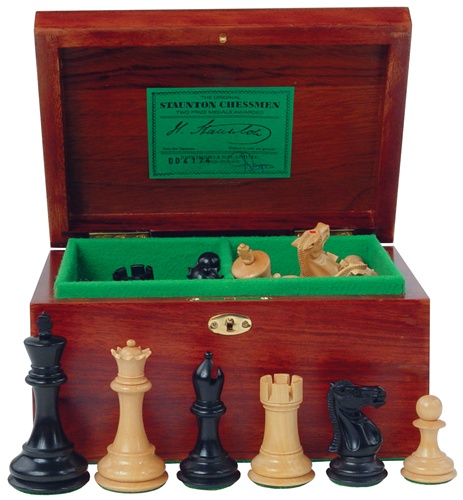 Jaques chess sets have been and are the "Gold Standard" for chess sets. A Jaques will always hold its value and constantly brings the highest prices at auction. Jaques' latest creation is the new Millennium Staunton chessmen, a modification of the design produced by the firm around the turn-of-the-century. The form, board presence and exquisite craftsmanship of Jaques chess sets from that period have been recaptured and are being offered for the first time.

FREE Shipping (Continental US only) on
All Chess Sets and Boards