Keeping score with algebraic chess notation is easy! Here is a tutorial on how to keep your game score with chess notation. Most 7-year olds can do it, and it is required (if you know how) in US Chess Federation (USCF) tournaments. You can buy a scorebook for $3 a piece to keep track of 50 of your games (or just use a blank page).

Advantages of scorekeeping include: 1) Replay your games to show better players and learn from your mistakes, 2) Re-set positions after illegal move sequences, 3) Prove who is to move and what the position is, and 4) Claim three-fold repetition and many other rules that require scoresheet proof. To keep score:

1. Each line of squares going up and down the board is called a “file”. For example, at the start of the game, both Kings are on the same file. Files are lettered with small letters: a, b, c, d, e, f, g, h. No matter what color you play, the “a” file is always on White’s left and Black’s right! The Kings are on the “e-file.” 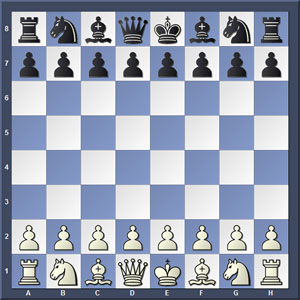 2. Each line of squares going left to right across the board is called a “rank”. For example, at the start of the game, all your pawns are on the same rank. Ranks are numbered 1, 2, 3, 4, 5, 6, 7, 8. The first rank is always where White sets up his major pieces; the eighth rank is where Black sets up his major pieces. No matter what color you play, the rank in front of Black is always #8!

5. Every time you move, you write the letter for the piece that moved followed by the name of the square it moved to. For example, Ke2 or Qh5 or Bh8 or Nf6. No dashes; it’s that easy. For pawn moves you don’t write the “p”, just the destination square: e4, e5, h8. Remember: Capital letters are pieces, small letters files

6. If more than one piece of the type that moved can move to the same destination square, put the name of the rank or file where the piece came from after the piece name to make the move unique: Rae1 or N8d7.

7. When you capture with a piece, put an “x” between the name of the piece and capture square: Kxe2, Qxh5.

8. When you capture something with a pawn, instead of putting the name of the piece on the left, you put the file (not the square) it came from, then the x and the square on which it captured. For example: dxe5 or hxg6. Pawn captures are the most commonly misused part of keeping score, so practice this correctly.

9. When a pawn reaches the final rank, indicate the square and the promoted piece, separated by an "=" sign. For example, a8=Q or c1=N.

12. When using a blank page, write the move numbers first down the left side of the page (column form). Black’s moves are written to the right of White’s. Remember, both players have a first move. Each player writes down all the moves for him and his opponent. Both players should be writing the exact same thing, since the first rank is always in front of White and the eighth in front of Black. To best learn, keep score for 10+ games (half White and Black) over a short period of time. Tip: Write your move before you play it!

Thank you for visiting our chess notation page. If you would like to make a comment on the information on chess notation, please email us at email@chesscentral.com.