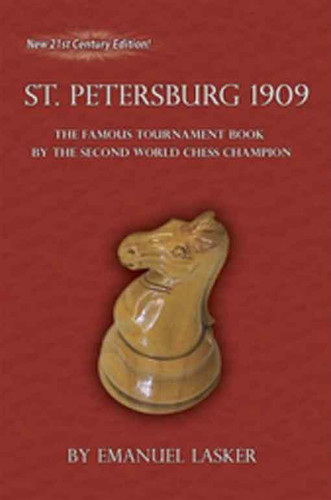 One of the great chess tournaments of all time! This famous tournament book by the 2nd World Chess Champion covers the premier event of 1909, by far the strongest chess competition held that year. Even today, St. Petersburg 1909 ranks high on any list of top tournaments, a trial of skill which produced more than a few "anthology" games. In February 1909, nineteen of the world's best chess players gathered in St. Petersburg to determine top honors among these elite masters. World Champion Emanuel Lasker topped the list of competitors, which also included Akiba Rubinstein, considered by many to be Lasker's likely successor. Carl Schlecter, who would play one of the most infamous matches against Lasker a year later, and many other "greats" of the era including Spielmann, Bernstein, Teichmann, Mieses and Tartakower to name but a few. This is the official tournament book available for the first time in English in algebraic notation, as written by Emanuel Lasker. He annotated all 175 games in the clear, instructive style that would become his trademark. The great 1909 International Chess Congress has long since taken its place among the greatest chess tournaments of all time. Now you may experience this 21st-century edition of Lasker's terrific tournament book.

About the Author
German-born Emanuel Lasker is considered by many to be the greatest chessplayer of all time. He was the Second World Champion, holding the title longer than anyone, for 27 years from 1894-1921. He also established himself as one of the great chess authors of all time, with such classics as "Common Sense in Chess," "Lasker's Manual of Chess" and the tournament book of the great St. Petersburg 1909 tournament.