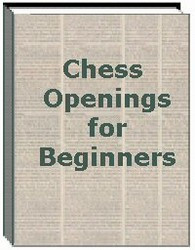 Today there are a number of general opening manuals available, like the Encyclopedia of Chess Openings, or Modern Chess Openings, or Batsford Chess Openings and so forth. Editions are updated regularly with the latest chess theory, and each one attempts with varying success to cover all the main openings in chess. Today's "complete" openings guide is massively thick (ECO above runs to 5 volumes), and aims to offer topical tournament preparation for the practical tournament player. In other words, lots of technical information and much of it reduced to abstract chess notation, critical marks and evaluation symbols.

What we have lacked until now is a useful overview of chess openings, presented with enough simple text (explanations yes, words!) to show what is happening on the board. Not in crushing detail, perhaps only a few moves of analysis, but with all the standard alternatives and variations discussed. This manual, E. E. Cunnington's Chess Openings for Beginners, supplies a sore need among players wishing to understand how the openings work, and what are the basic ideas behind the openings in chess. Of course research into opening theory continues to develop, but we're talking about fundamentals - the main contours of the Ruy Lopez, for example, remain what they always were. Chess Openings for Beginners is therefore as vital and rewarding in the 21st century as it was sixty years ago.

Here's what you get with Chess Openings for Beginners.

* Seven main text documents, with diagrams and explanations
* Hyperlinks and graphic commentary - even a scan of the beautiful cover
* 52 annotated Surveys of all chess openings, as follows:

Frankly, to own a high quality electronic rendering of this classic is an opportunity no advancing chess player ought to miss. Download Chess Openings for Beginners today.