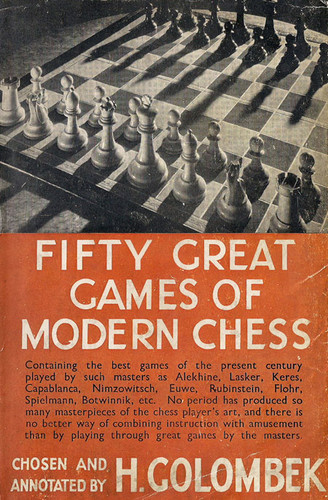 Harry Golombek was a highly respected British chess author, and strong player in his own right - he earned the title of International Master in 1950, represented England nine times in the chess Olympiads, and was awarded an Honorary Grandmaster title in 1985. As an author Golombek wrote detailed commentary on the great masters of chess, from Steinitz to Fischer, and his clear and entertaining annotations were a favorite of previous generations.

In this book Golombek has selected fifty chess games from the first forty years of the 20th century until the second world war, more than one game per year. There are ten games by Alekhine, and at least four by each of the following: Capablanca, Euwe, Flohr, Keres, Nimzowitsch, Reti, and Rubinstein. These are great games by great players, cherry-picked from the golden age of modern chess. As the original cover slip rightly states, "No other period has produced so many masterpieces of the chess player's art, and there is no better way of combining instruction with amusement than by playing through great games by the masters."

In short, Fifty Great Games of Modern Chess is an anthology, filled with "anthology pieces" of lasting value, each tastefully commented by a renowned chess author - the best of everything in one package!