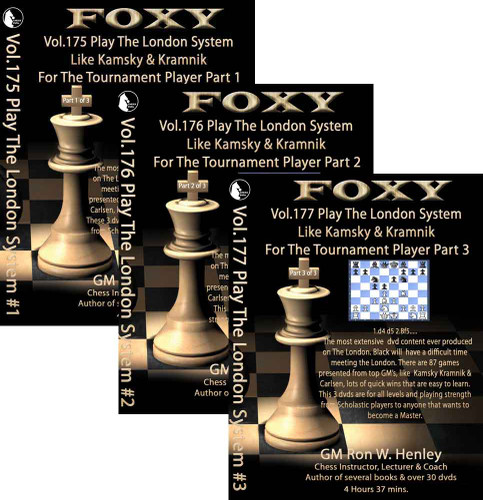 Here is a special 3 part DVD set with 13 hours of easy to learn content! You get a complete system for White after 1.d4 d5 2.Bf4, with 87 highly instructive games for the tournament player - presented by GM Ron W. Henley, an experienced chess instructor, lecturer, coach, and author of over 30 books and DVDs! This chess video collection is by far the most extensive DVD content ever produced on the London System, a chess opening following 1.d4 d5 2.Bf4 that Black will have a difficult time meeting. There are 87 games presented from top GM’s like Kamsky, Kramnik, and Carlsen, with plenty of quick wins that are fun to learn. This material is meant for any level or playing strength, from Scholastic competitors to those who want to become a Master.

A word from GM Ron Henley:

The London System is the new rage because it is a legal way to cheat at chess.

Why? Because with minimal study the London is very easy for White to play, and extremely difficult for Black to beat. Playing the correct move order, you can achieve positions that are equivalent to playing the Stonewall on steroids. The idea is you get a Knight on e5 and d2, a deadly Bishop on d3 aiming at Black's castled h7, and a Queen that can go to f3 (protecting e4 from Black's Nf6 Knight) then to h3 if needed. Another plan is to castle, preparing a timely f4-f5 or pawn storm if Black offers a weakening ...h6 target. Also you can get a bonus if your hemmed-in bad Bishop on c1 is exchanged for Black's good Bishop on d6 by the route Bc1-Bf4xd6. I used this exact plan to beat my chess computer, notching my first win against about a million games lost.

This opening is great for beating a higher rated player - as a postal Master I had to face the London System as Black in the 1980s. My opponent was rated 1300; I struggled most of the game; I spent days on each move and did not get any advantage; I know that countless hours were exhausted and I never made a dent. To make matters worse, my opponent told me he'd just had brain surgery and was playing chess to improve his memory. We finally settled on a draw. I now feel vindicated by watching the scores of other GM's go down as they play against the London. These 3 DVDs contain 13 hours of content which offers a complete 1.d4 d5 system for White. You don't need to learn all 13 hours to play the London, but it is always good to have a reference if you encounter unfamiliar Black responses.

Early history and development of the London System.