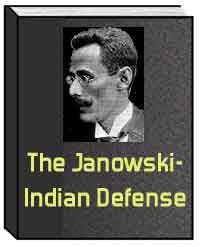 The Janowski-Indian Defense
by Eric Schiller

The Janowski-Indian arises after 1.d4 Nf6 2.c4 d6 3.Nc3 Bf5, and is a flexible defense that can lead either to the King's Indian or into original positions offering lively play and many interesting tactical and strategic opportunities for the player of the Black pieces. When Janowski introduced this opening back in the 1920s it was greeted with some derision and scorn, especially from the world champion Alexander Alekhine. In the 1980s however American Kamran Shirazi among others brought this opening back into the professional arena. Among the fans of the opening are Mikhail Tal, Bent Larsen, Florin Gheorghiu and Mihail Suba.

The Bishop at f5 prevents White from immediately advancing the pawn to e4, except as a gambit. So he can play f2-f3 or perhaps g2-g3 and fianchetto the King's Bishop, but White does not have a large number of options. The opening is flexible enough so that in most variations Black has a choice between good continuations.

It is possible to play the Janowski against any level of competition, and it can be either a mainstay of your repertoire as Black, or a side variation to be used from time to time, especially against unsuspecting opponents. It is easy to learn, easy to play, and White will not achieve anything more than his normal minimal opening advantage. The opening holds most appeal for players who like active positions and love to attack. Since Tal and Larsen both employed the Janowski-Indian, then any fighting chess player should also enjoy this opening. This e-book contains all of the games played in the Janowski, plus over two thousand others! It includes some games to show you the recommended moves, and examples of good strategy as well as errors that you must avoid. This is not an opening that requires a great deal of study, but it is useful to play through many games just to observe the flow of play and see how various strategies worked out in combat situations. By studying the material presented here you'll find what you need to master this opening in a short period of time.

The Janowski-Indian Defense e-book is presented in 3 text documents to guide you through the opening, including a general Introduction and Opening Report. There is a detailed opening key with 30 classification positions, and 15 Survey Games annotated by Schiller - even a photo of Janowski himself! Next you'll find over 2,100 game examples of the Janowski-Indian Defense in action, the largest collection anywhere.