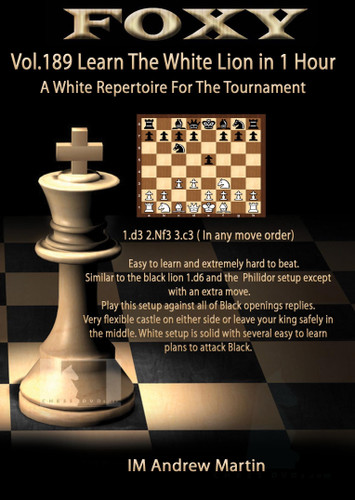 Easy to Learn, Hard to Beat

That's right, even playing against a computer - try it! This opening is the reverse of the Black Lion or Philidor which starts out 1...d6, 2...c6, and 3...Nf6 but with the benefit of an extra more.

Play the same system against all that Black can throw at you. The White Lion is great for any player who wants to get familiar positions right out of the opening. How many openings do you learn and never get positions that you study? You get to pick the opening now.

IM Martin includes a great game where a 2700 rated player who loses to a player who was rated 500 rating points lower. In total, ten instructional games offer White the option of castling on either side of the board or just keeping the King safely in the center. Also included an excellent endgame on how a Knight beats a Bishop - even with pawns on both sides of the board - and another on how to win an opposite color Bishop endgame.

We call the system The White Lion "Slow Poison," and it is rather unconventional. White plays almost without theory, avoiding sharp, tactical lines, and turns the game into a battle of patience and will power. Depending on your style of play White has 2 choices - a quicker aggressive setup as well as the slower positional one, and either choice will leave your opponent out of the book.

Busy people don’t have an enormous amount of time to study chess theory. It would be great if it was possible to get a decent position, especially with White, without having to burn the midnight oil. That's what this all-new Foxy Openings video offers. White forces the opponent to think for himself right from the beginning of the game, and this is where a lot of average players will start to feel very uncomfortable.

Move out of the book and into your book. Use the slow, poisonous approach to win more games with The White Lion!