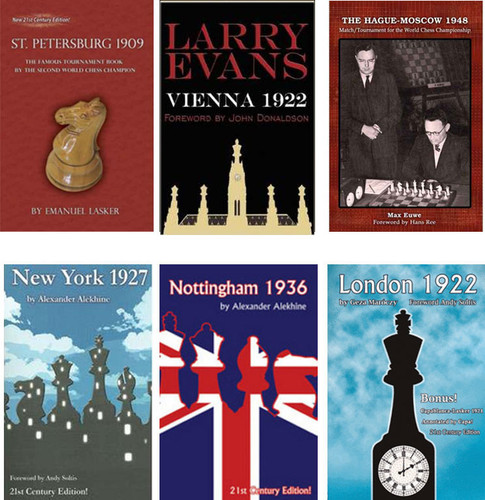 London 1922 International Chess Tournament
José Capablanca was the superstar of chess in 1922 and London was his first serious chess in the 15 months since he had won the championship title from Emanuel Lasker. "Capa" was the chess player whom even non-players could identify. But the tournament signified not only Capa's return to the game, it was also something of a revival of international chess after four years of war and four more of recovery. The new world champion would ease into first place undefeated ahead of future world champion Alexander Alekhine. Read More

New York 1927 Chess Tournament
This is unlike any other tournament book ever written. Not only do you have one of the greatest annotators of all time rendering some brilliant analysis, but he melds it with an exceptional agenda, an anti-Capablanca agenda. And since he wrote it after defeating Capablanca in their marathon match, he sounds like a sore loser who became a sore winner. Read More

Nottingham 1936 International Chess Tournament
The great international chess tournament at Nottingham, 1936 has taken its place next to other legendary tournaments such as St. Petersburg 1909, London 1922 and New York 1924. It set a record by featuring, for the first time, four men who had held the world championship title – José Capablanca, Alexander Alekhine, Max Euwe (the then reigning champion) and Emanuel Lasker. The champions were expected to be challenged if not surpassed at Nottingham by four young candidates, Sam Reshevsky, Reuben Fine, Salo Flohr and, in only his second trip to a foreign tournament, Mikhail Botvinnik, who turned 25 mid-tournament. Read More

The Hague-Moscow 1948 Match/Tournament for the World Chess Championship
The crossroads of chess history occurred on March 24, 1946, when the 4th world chess champion, Alexander Alekhine, passed away. He was the first – and still the only – champion to die while holding the title. To select a new champion, a powerful quintuple round-robin was held in The Hague and Moscow. The five strongest players of the era, including one former world champion, two future world champions and two perennial contenders, took part in a grueling two-month, 25-round tournament. “The match-tournament of 1948 in The Hague and Moscow was one of the most important events in the history of chess.Read More.

Vienna 1922 - International Chess Tournament
The first book – and sadly the last – by Larry Evans covers the Vienna 1922 international chess tournament, remembered as one of the first great tournaments after World War I. All the stars of the day (Alekhine, Bogoljubow, Grunfeld, Maroczy, Reti, Spielmann, Tarrasch and Tartakover) played here except Capablanca and Lasker, but it was Akiba Rubinstein who was to turn in an outstanding success scoring an undefeated 11½ from 14 to finish a point and half ahead of second place - Tartakover was two and a half points ahead of Alekhine! This was the first book ever written by American Grandmaster Larry Evans. Read More

The International Chess Congress, St. Petersburg 1909
One of the great chess tournaments of all time! This famous tournament book by the 2nd World Chess Champion covers the premier event of 1909, by far the strongest chess competition held that year. Even today, St. Petersburg 1909 ranks high on any list of top tournaments, a trial of skill which produced more than a few "anthology" games. In February 1909, nineteen of the world's best chess players gathered in St. Petersburg to determine top honors among these elite masters. Read More