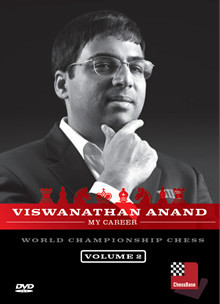 Acclaimed as the "Fastest Brain in the World," Viswanathan Anand is the world number one and World Champion. Experts rate him as one of the biggest natural talents in the history of the game. In March 2007 he reached the number one spot on the world ranking list by winning the prestigious Linares tournament. In September 2007 at Mexico City Anand became undisputed World Chess Champion ending a schism in the chess world which had lasted since 1993. If his talent as a rapid chess player is legendary, his records in classical chess have been superlative. In January 2006 he became the only player in the tournament's 70-year history to win the Corus Chess event five times (1989, 1998, 2003, 2004 and 2006). He has won the Linares Super Tournament twice (1998 and 2007), the Dortmund GM three times (1996, 2000 and 2004), and countless other important events like, Madrid Masters, Biel, etc.
The second Video Download begins in 2000, when Anand became FIDE World Champion, and it ends with his victory in the 2007 World Championship in Mexico. Anand not only analyzes his best games, but casts a look back at the World Championship in Delhi/Teheran in 2000 and the years before, he discusses the situation in the Bundesliga and Kasparov's retirement from tournament chess. 4:28 hours playing time.
System requirements: PC, Windows XP/Vista/Windows7, Video Download-ROM drive, sound card.